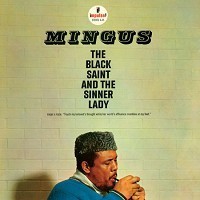 Mastered by Kevin Gray  from the original analog master tapes

The Black Saint And The Sinner Lady, Charles Mingus’ Impulse! debut, is awarded the rare, prestigious “crown” rating in the normally stingy Penguin Guide to Jazz, which deems the 1963 masterpiece “Ellingtonian in ambition and scope, and in the disposition of horns, the piece has a majestic, dancing presence.” Add in long-form compositional devices, pioneering dubbing techniques, social themes, and intense timbres, and you have music of the very highest order.

Indeed, each composition, from the opening "Solo Dancer" to the closing "Group and Solo Dance" stands as a musical expression of Mingus' philosophy of life, love and the world around him. For Mingus and the musicians that joined him (Charlie Mariano, alto saxophone; Jaki Byard, piano; Jay Berliner, guitar; Don Butterfield, tuba; Dick Hafer, tenor saxophone and flute; Quentin Jackson, trombone)

The Black Saint And The Sinner Lady was much more than just another album: it was a jazz ballet performed by a small ensemble. It has become a landmark event.  Rendering all previous editions, analog and digital, lesser by comparison, Analogue Productions' extraordinary 45RPM version boasts sonics that will have you convinced Mingus and his compadres are playing in your room. You won't believe how amazing this sounds until you hear it!

Bassist / composer Charles Mingus is one of the most radical figures in American music. Throughout the '50s, he worked as a sideman with legendary players Charlie Parker, Dizzy Gillespie, and more. In the '60s, he gained recognition as a bandleader, often followed by controversy for making strong-minded statements in the press about race, politics, and stodgy music critics. While Mingus received many honors posthumously as well as during his career, perhaps his greatest achievement was transcending the restrictive label of jazz. The Black Saint and The Sinner Lady is without question Mingus' magnum opus. Originally released on Impulse! in 1963, the album broke new ground in both genre-defying composition and innovative recording techniques. A six-part suite with dramatic shifts in mood and tempo, The Black Saint and The Sinner Lady features the three-way brass dialogue of trumpets, trombone and tuba, swooping reeds, and awe-inspiring rhythm section.

Balancing delicate Spanish modes and Ellingtonian themes, the ensemble breaks into a divine cacophony of group improvisation on par with free jazz giants like Ornette Coleman or Cecil Taylor. In his best-known essay, "Psychotic Reactions and Carburetor Dung," Lester Bangs praises, "the experience of the first few listenings to a record so total, so mind-twisting, that you authentically can say you'll never be quite the same again. Black Saint and The Sinner Lady did that, and a very few others. They're events you remember all your life." This long out-of-print vinyl release has been carefully remastered from the original master tapes.

"The Black Saint and the Sinner Lady is one of the greatest achievements in orchestration by any composer in jazz history...The result is one of the high-water marks for avant-garde jazz in the '60s and arguably Mingus' most brilliant moment." - 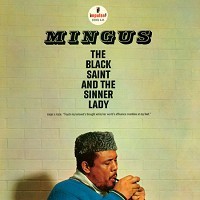