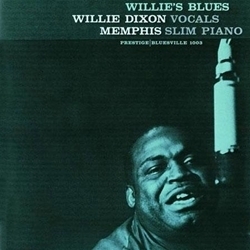 Part of the ultimate audiophile Prestige stereo reissues from Analogue Productions — 25 of the most collectible, rarest, most audiophile-sounding Rudy Van Gelder recordings ever made. All on 200 Gram &  on Hybrid SACD

"Since the early 1950s, Willie Dixon has been the studio kingpin of Chicago blues, having written, produced, and played bass on countless classics by Muddy Waters, Howlin’ Wolf, Otis Rush, Koko Taylor, and many others.

Dixon has always managed to find time away from the studio to work as a performer, slapping his upright bass and singing his own tunes in a highly compelling, conversational baritone. He was working the coffeehouse circuit with pianist Memphis Slim when he cut this, his first album as a leader, in 1959. Besides his unique interpretations of “Nervous” and “Built for Comfort,” it includes eight lesser known compositions from Dixon’s prolific pen. It is unlike all other albums by Dixon, as he and Slim are accompanied, not by the usual crew of Chicago blues players, but by a group of New York mainstream jazzmen, including tenor saxophonist Hal Ashby, guitarist Wally Richardson and drummer Gus Johnson."

Willie’s Blues on the other hand is recorded in New York with accompanying musicians and was Dixon’s first as a bandleader. However, this is not the usual Chicago Blues backing musicians; instead it is recorded with a trio of New York mainstream jazzmen, playing sax, guitar and drums. The jazz sound becoming evident through Wally Richardson’s Chet Baker sounding guitar. Most obvious on That’s My Baby and Nervous. Of the twenty two tracks, Dixon has penned seventeen, with the traditional John Henry making an appearance and the remaining four credited to P Chatman (Memphis’ father, to whom he paid homage by using his name). My favourite track is the classic Built For Comfort.

In an age of mediocrity where fame and fortune is a reward for so little talent, it’s a joy to be reminded of the talent of two of Blues greatest protagonists.

The 200g LPs will be cut at 33rpm  at the  state-of-the-art pressing plant, Quality Record Pressings, plated by Gary Salstrom. 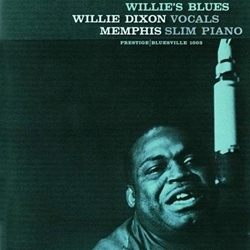