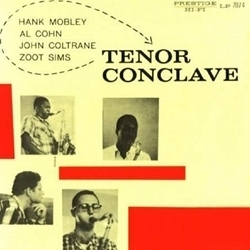 Stellar playing from 4 masters of the Tenor. Swings hard ! What a beautifully mastered recording. A joy to listen too. Don't miss this one. - LP Review

The record is presented in glorious mono, as many of AP’s Prestige titles are.  Tenor Conclave plays out on a giant sound stage – deep and wide. You’d almost swear the Saxes were spread out left to right, but it’s an illusion. The detail is unbelievable with the Garland Trio floating just beneath the action before surfacing for air. They’re given ample room to breathe, and the listener’s focus and attention is rewarded without fail.  an analog release from the original master tapes with Kevin Gray’s name attached to it. One hundred percent worth it for an audiophile’s ears. You never know when winter might arrive, and you never know what the next season brings. Now is always the time.Sound 5/5 Homethreatre&Highfidelity

This unusual meeting of four tenor saxophone players from different "schools" was part of the Prestige Friday afternoon jam session series but far from a typical outing. The giant forebears of Coleman Hawkins, Lester Young, and Charlie Parker inform the backgrounds of the performers on this LP — Hank Mobley, Al Cohn, Zoot Sims, and John Coltrane — and other influences such as Ben Webster, Dexter Gordon, and the Sonnys (Stitt and Rollins) show up, too, depending on which of the four protagonists you’re talking about.

With the Red Garland Trio supplying the underpinning, the four tenors meet on the common ground of the blues ("Bob’s Boys"), "I Got Rhythm" ("Tenor Conclave"), and two old standards. (The originals are by Mobley.) Rather than the stylistic differences, what stands out here is the compatibility and spirit of the four meeting on this common ground in an uncommon session.

John Coltrane, Hank Mobley, Al Cohn and Zoot Sims. With the fantastic Red Garland Trio holding down the rhythm section, the one-of-a-kind collective finds common ground and then some here on two Mobley originals and a pair of old standards.
Released in conjunction with Analogue Productions’ Prestige Mono Series, this 200g vinyl pressing by Quality Record Pressings has a flat edge profile and deep groove label, true to the original LP and is housed in a deluxe high-gloss tip-on album jacket.
However Tenor Conclave was first released as credited to the "leaderless" Prestige All-Stars -- consisting of tenor saxophonists John Coltrane, Hank Mobley, Al Cohn, and Zoot Sims. Providing support are pianist Red Garland, bassist Paul Chambers, and drummer Art Taylor. The Mobley-penned title track commences the effort with the quartet of tenors showing off their stuff in high-flying style. It takes a couple of passes and somewhat of a trained ear to be able to link the players with their contributions, but as is often the case, the whole tends to be greater than the sum of the parts. After a brief introduction with all four rapidly reeling off short riffs, Mobley charges ahead into truly inspired territory. The midtempo take of "Just You, Just Me" keeps things lively with a light swinging pace that is custom-made for bringing the combo's jocular side to the surface, particularly toward the end as they "trade fours," with each tenor blowing four bars before passing the melody on.
The other Mobley composition is "Bob's Boys," and by all accounts it is the most compelling piece on the outing. The blues-based tune rollicks as Coltrane, Mobley, Cohn, and Sims find themselves configured in a seeming myriad of sonic face-offs. Wrapping up Tenor Conclave is an ultra-cool and sophisticated "How Deep Is the Ocean?" Cohn commences the long and luscious reading with a subtle strength, suggesting the powerful undercurrent flowing throughout the number. Also, listeners are treated to what is possibly Garland's finest interaction, leading right into Sims, Chambers, and finally a sublime Coltrane caboose. 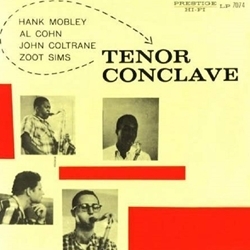