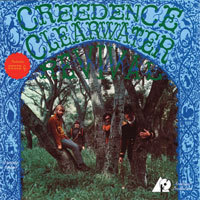 With the release of this extraordinary debut album in July 1968, Creedence Clearwater Revival was launched upon a career that little more than a year later would lead to enormous worldwide popularity.

The four-man group from San Francisco's East Bay had worked ten years as a bar band and recorded several singles on the Scorpio label (under the forgettable name Golliwogs), but it was with this Fantasy release that CCR caught fire. Lead singer/ guitarist/ writer John Fogerty emerges as a fine lyric shouter with "Ninety-Nine and a Half," "I Put A Spell On You" and "Suzie Q," a brilliant extended redition of the Dale Hawkins classic that quickly became a Top Ten Hit.

Released in the summer of 1968 -- a year after the summer of love, but still in the thick of the Age of Aquarius - Creedence Clearwater Revival's self-titled debut album was gloriously out-of-step with the times, teeming with John Fogerty's Americana fascinations. While many of Fogerty's obsessions and CCR's signatures are in place -- weird blues ("I Put a Spell on You"), Stax R&B (Wilson Pickett's "Ninety-Nine and a Half"), rockabilly ("Susie Q"), winding instrumental interplay, the swamp sound, and songs for "The Working Man" -- the band was still finding their way.
Out of all their records (discounting Mardi Gras), this is the one that sounds the most like its era, thanks to the wordless vocal harmonies toward the end of "Susie Q," the backward guitars on "Gloomy," and the directionless, awkward jamming that concludes "Walking on the Water." Still, the band's sound is vibrant, with gutsy arrangements that borrow equally from Sun, Stax, and the swamp. Fogerty's songwriting is a little tentative. Not for nothing were two of the three singles pulled from the album covers (Dale Hawkins' "Susie Q," Screamin' Jay Hawkins' "I Put a Spell on You") -- he wasn't an accomplished tunesmith yet.
Though "The Working Man" isn't bad, the true exception is that third single, "Porterville," an exceptional song with great hooks, an underlying sense of menace, and the first inkling of the working-class rage that fueled such landmarks as "Fortunate Son." It's the song that points the way to the breakthrough of Bayou Country, but the rest of the album shouldn't be dismissed, because judged simply against the rock & roll of its time, it rises above its peers.
All of these reissues were so critically acclaimed upon their release some 10 years back. And most have been sold out for a long, long time. Now they're back and better than ever!
Unquestionably one of the greatest American rock bands ever, Creedence Clearwater Revival will best be remembered for their unique bayou sound popularized in songs like "Proud Mary" and "Green River." Although their music evoked the raw, gospel-tinged sound of the rural South, Doug Clifford, Stu Cook, and Tom and John Fogerty actually hailed from El Cerrito, California, a small town near Berkeley.
The 1968 release of the band's debut album Creedence Clearwater Revival paralleled the flowering of the San Francisco music scene, but the Creedence phenomenon had little in common with the "San Francisco Sound." That first LP contained rock standards such as Dale Hawkins's "Susie Q" and Screamin' Jay Hawkins' "I Put a Spell on You," as well as original material by John Fogerty, who was to emerge as one of rock's most influential songwriters.
With the release of their second album, Bayou Country, which was home to such classics as “Proud Mary” and “Born on the Bayou,” it became evident that Creedence had an uncanny knack for writing hits. Third album Green River and songs like "Bad Moon Rising" and the title track and fourth album Willy and the Poor Boys and cuts like "Down On The Corner" and "Fortunate Son" propelled the band even further towards greatness.
Fifth album Cosmo's Factory, the name drummer Doug "Cosmo" Clifford gave CCR's rehearsal studio because so many hits were created there, lived up to its namesake in spades. Cosmo’s Factory was the fourth and biggest of the string of five Top 10 albums CCR released in 1969 and 1970. Featured here are staples like “Travelin’ Band,” “Lookin’ Out My Back Door,” “Who’ll Stop the Rain,” and “Run Through the Jungle.”
After four years of nearly nonstop performing CCR had become the number one American rock and roll attraction and they sound as polished and tight as ever on their criminally underrated sixth album Pendulum (1970). Of the two hit singles from the release, "Hey Tonight" and "Have You Ever Seen The Rain," the latter's slower ballad format clearly suggests that the band was exploring new styles, including a developing emphasis on instrumentals. With this swing of the Pendulum the creative tasks would in the future also be shared by all members of the group for the first time.
1.    I Put A Spell On You
2.    The Working Man
3.    Susie-Q
4.    Ninety-Nine and a Half (Won't Do)
5.    Get Down Woman
6.    Porterville
7.    Gloomy
8.    Walking on the Water 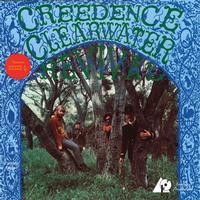