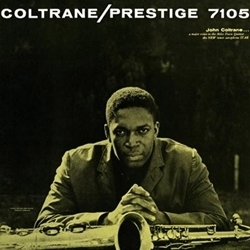 Coltrane's tenor sounds more detailed and three-dimensional on the SACD, which should be expected when comparing a copy to an original master source. APstates unequivocally that original master tapes were the source for the mono and stereo Prestige series SACDs:5/5 Sacdnet

"John Coltrane is, in a sense, a new .star. but he has not arrived through high-pressure press agentry. He has been building on more solid ground. From the time of his joining the Miles Davis quintet in late 1955 through to his brilliant work with Thelonious Monk at the Five Spot Café in the summer of 1957, Trane has steadily increased his accomplishments on his instrument and gained new admirers for his playing among fellow musicians and the serious listening public.

The very nature of his development and progress marks him not as a fly-by-night “star” who comes bursting across the sky and then fizzles out but as a definite addition to the select group of musicians who play influential roles through their ability to say something valid in a new way. You have heard Coltrane on Prestige with Miles Davis, with Hank Mobley, with Sonny Rollins, the aforementioned Mating Call with Tadd Dameron, and Tenor Conclave. This, however, is his first date as a leader and in that role, Trane has chosen the musicians, contributed several compositions, and also has written some arrangements. John Splawn, a young trumpeter from Harrisburg, Pennsylvania, plays in the ensemble on four numbers and solos on two of these. Sahib Shihab, the saxophonist who is best known for his alto work with Thelonious Monk in the Forties and Fifties and his baritone playing with Dizzy Gillespie in the Fifties, here appears on the larger horn in three selections. He is heard in solo on two of these. Mal Waldron, at present Billie Holiday’s accompanist, and Red Garland, a Miles Davis quintet regular, split the piano assignment. The remainder of the rhythm section remains constant throughout the entire session. On bass is the impeccable Paul Chambers from the Miles Davis group and on drums, Al Heath, younger brother of Percy, from Philadelphia where he has played with the best of the local musicians. “Bakai” (which means “cry” in Arabic), by Cal Massey, opens side one. Its handsome minor theme is expounded by Red Garland, Coltrane (who really cries), and Shihab. The rest of side one is handled by the quartet featuring Trane and Red. Two ballad standards, “Violet for Your Furs,” and “Time Was,” are the subjects; the former receives a sensitive ballad treatment while the latter is done in bright medium time. Side two opens on “Straight Street,” a Coltrane composition and arrangement which features solos by the leader, Johnnie Splawn, and Mal Waldron. An interestingly different Coltrane interpretation of the seldom-done “While My Lady Sleeps” is Trane’s alone until Splawn joins him for a final eerie note. Trane’s “Chronic Blues” is the closer and gives all the horns and Waldron solo room." -