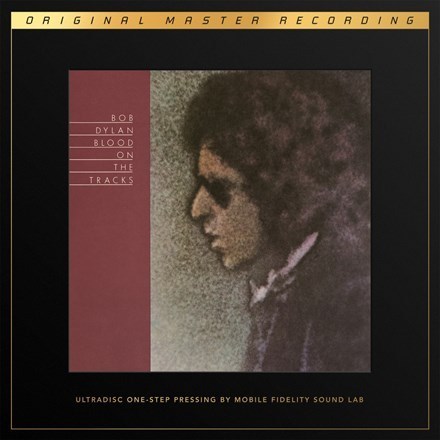 Many versions of Blood on the Tracks exist, but this one is in a sonic category all its own. It represents a transformation of the album's sound, at least as it has been known. The poised resolution, visceral punch, low-end definition, and midrange presence present a different view of the music This Blood on the Tracks is both different and distinctly better -- a version to listen to intently and savor, because of the greater insight it brings to this important music. It's a work of exuberance, of the desire to create the best LPs possible, which, thanks to the One-Step process and SuperVinyl, Mobile Fidelity can rightly claim here and now.- Sound 5/5 Theaudiobeat

These double 45rpm single-step AAA boxed set pressings are as good as vinyl records get. If they don’t sound good on your system, it’s your system - Analogplanet's Best Reissues of the Decade!

Bob Dylan was at several crossroads in the mid 1970s. Artistically, he was largely written off as being past his prime. Emotionally, he was suffering through a painful divorce from his then-wife Sara Lowndes. Creatively, he appeared at a stalemate, his previous decade's unprecedented run of transformational brilliance finished. Then came Blood on the Tracks. A start-to-finish cycle that documents a lover's pursuit of, entanglement with, and loss of a woman, the bracingly intimate 1975 effort remains one of the most encompassing break-up albums ever made and ranks as the most personal statement of the Bard's career.