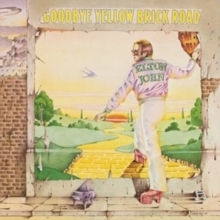 Mastered for vinyl by Doug Sax & Robert Hadley at The Mastering Lab, Inc

Almost certainly Elton John's biggest seller, save his first greatest hits collection, this was the album that created a true superstar.

The lasting legacy of Goodbye Yellow Brick Road can still be seen with a wealth of emerging new talent quick to praise the influence it had on their own careers. Artists ranging from BRIT winner Ed Sheeran ("Candle in the Wind"), R&B sensation Miguel ("Bennie and the Jets"), rock band Fall Out Boy ("Saturday Night's Alright for Fighting"), add their own interpretations to the classic originals on a sensational bonus disc. Recorded with producer Peter Asher at the helm, Elton and Bernie's influence on modern day Americana, R&B and soul, and rock singers continues to shine through.
Side 1
Funeral For A Friend [Love Lies Bleeding]
Candle In The Wind
Bennie And The Jets
Side 2
Goodbye Yellow Brick Road
This Song Has No Title
Grey Seal
Jamaica Jerk Off
I’ve Seen That Movie Too
Side 3
Sweet Painted Lady
The Ballad Of Danny Baily [1909-34]
Dirty Little Girl
All The Girls Love Alice
Side 4
Your Sister Can’t Twist [But She Can Rock’n’Roll]
Saturday Night’s Alright For Fighting
Roy Rogers
Social Disease
Harmony