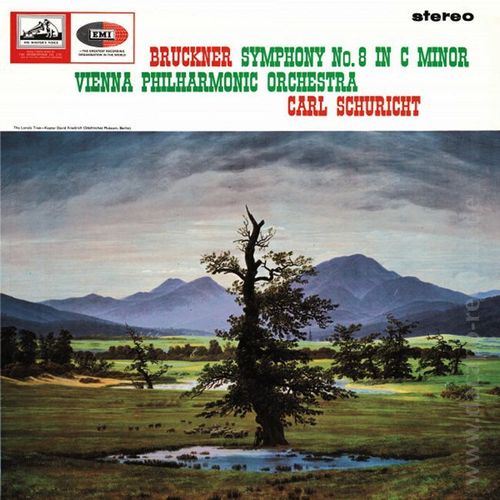 Anton Bruckner’s Symphony No. 8 is the last symphony that the composer completed in full (he died before the final movement of the Symphony No. 9 was finished). Bruckner worked on the Symphony during breaks from his commitments at the Vienna Conservatory and University of Vienna and all four movements were competed in draft by the end of the summer in 1885. It took a further two years to complete the orchestration of this monumental symphony.

This special interpretation by Carl Schuricht with the Vienna Philharmonic Orchestra represents Bruckner’s 8th in its true unrivalled glory. Schuricht provides both awesome and dramatic control of the orchestra through the movements, allowing the intellectual scope and greatness of the symphony to be fully revealed to the listener. The tempo is fast but controlled, full of colour and expressive form that can be vacant in other interpretations. A truly beautiful modern and dynamic interpretation of this symphonic masterpiece.

Originally released 1964, The Vienna Philharmonic Orchestra, conducted by Carl Schuricht, performs Bruckner's Eighth Symphony. Testament is an artist-based label, not restricted to any particular period of recording history, and its releases are selected from the archives of some of the largest record companies and radio stations in the world. With the permission and cooperation of these companies and stations.
Testament releases previously unpublished and deleted recordings from their archives, using their original master tapes and 78rpm metal parts Testament also has access to their extensive photographic archives and comprehensive research facilities.
Testament is thus in a unique position and one that is enjoyed by no other independent record company specializing in the reissue of archive recordings.
Testament LPs are cut onto lacquer from the original master tapes at Abbey Road Studios using full analogue techniques throughout production and pressed onto 180-gram virgin vinyl.
Lacquers cut at Abbey Road Studios
Cut from original master tapes
100% Analogue - Cut using full analogue techniques throughout production
Musicians
Vienna Philharmonic Orchestra
Carl Schuricht conductor
Selections
Anton Bruckner (1824-1896)
SYMPHONY NO. 8 IN C MINOR
SIDE ONE:
1st Movement: Allegro moderato
SIDE TWO:
2nd Movement: Scherzo (Allegro moderato) & Trio (Poco andante)
SIDE THREE:
3rd Movement: Adagio
SIDE FOUR:
4th Movement: Finale