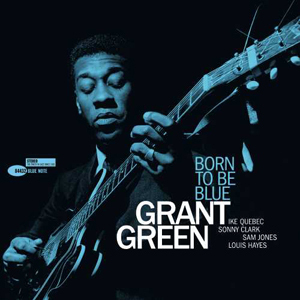 The only sound besides the music is the character of Rudy Van Gelder’s recording studio. This is especially helpful on an album like this, where the level of the music is even and gentle. There is a wonderful sense of space around each instrument that goes a long way toward reducing the mainly left/right layout that Van Gelder used at the time, presenting a much more realistic soundstage. Sound 4.5/5 TheAudioBeat
There was no shortage of choices in this category either led this year by the many new releases from the Blue Note vaults by Joe Harley and Tone Poet. Born to Be Blue
Born to Be Blue is an album by American jazz guitarist Grant Green featuring performances recorded in 1962 and released on the Blue Note label. The AllMusic review by Alex Henderson awarded the album 4½ stars and stated "Although Grant Green provided his share of groove-oriented soul-jazz and modal post-bop, his roots were hard bop, and it is in a bop-oriented setting that the guitarist excels on Born to Be Blue." - ToneAudio Best Jazz record 2020
Tone Poet Audiophile Vinyl Reissue Series: "Tone Poet" Joe Harley—co-founder and co-producer of the acclaimed Music Matters audiophile vinyl series—is the producer of this new series of all-analog, mastered-from-the-original-master-tape 180g audiophile vinyl reissues in deluxe gatefold packaging. Mastering was done by Kevin Gray (Cohearent Audio) and vinyl was manufactured at Record Technology Incorporated (RTI). The titles were handpicked by Harley and cover lesser-known Blue Note classics, modern era standouts, and albums from other labels under the Blue Note catalog.
Extreme attention to detail has been paid to getting these right in every conceivable way, from the jacket graphics and printing quality to superior LP mastering (direct from the master tapes) by Kevin Gray to superb 180 gm audiophile LP pressings by Record Technology Inc. Every aspect of these Blue Note/Tone Poet releases is done to the highest possible standard. It means that you will never find a superior version. This is IT.
The so-called Tone Poet (Joe Harley) is confident that his audiophile reissues will allow 21st-century listeners to hear what the musicians heard as the master tape was played back on the studio monitors in Rudy Van Gelder's studio 50 or 60 years ago. He believes that, in terms of quality, Blue Note albums have never sounded or looked better. "Every aspect of these Blue Note releases is done to the highest possible standard," he says. "It means that you will never find a superior version."
Musicians
Grant Green guitar
Ike Quebec tenor saxophone
Sonny Clark piano
Sam Jones bass
Louis Hayes drums
Selections
Side One:
Someday My Prince Will Come
Born To Be Blue
If I Should Lose You
Side Two:
Back In Your Own Backyard
My One And Only Love
Count Every Star