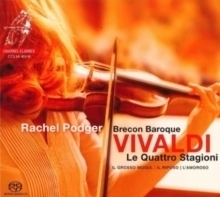 Part of the freshness stems from the interaction between Podger and her one-to-a-part ensemble. She’s first among equals and the dynamic couldn’t be further removed from the usual notion of the... — BBC Music Magazine, June 2018, 5/5

Vivaldi penned more than 500 concertos. At least 214 of these are for solo violin and orchestra, but as Michael Talbot remarks, ‘scarcely a year passes without the announcement of some fresh discovery’. So what was the ‘concerto’ to Vivaldi? What about it did he love so much to have composed so many? In the decade before Vivaldi composed Le Quattro Stagioni.

Despite what this recorded collection suggests, few of Vivaldi’s instrumental works have programmatic titles. On the whole, titles gesture towards a general mood. Il Riposo and L’amoroso are examples of this indication of Affekt – indeed, both are united in their key of gleaming E major. The case of Il Grosso Mogul is stranger. There seems to be no known link between Vivaldi and the Indian court of the Grand Mughal, Akbar. The extreme virtuosity required by the soloist in the outer movements, as well as the long, fully written-out cadenzas, suggest a theatrical function. Perhaps Vivaldi performed it as a ‘theatre concerto’ as part of an opera plot set in India. French royalty, however, did play a huge role in the reception of Le Quattro Stagioni.