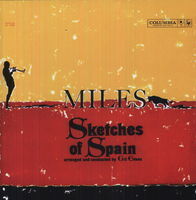 The third and final of the great Miles Davis-Gil Evans collaborations of 1957-59 was also their most ambitious. This set finds Davis in the forefront improvising on two numbers associated with Spanish music and three Evans compositions in that idiom. Much of the music is quite dramatic and emotional (notably Saeta) and plays at his best throughout, really stretching the boundaries of jazz.