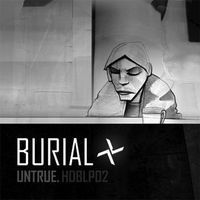 2007 sophomore release from the UK's mysterious and much-acclaimed Burial. Of all the artists past and present who claim to let their music do their talking for them, Untrue, is a record of weird Soul music, which lovingly processes spectral female voices into vaporized R&B and smudged two-step garage.

Vocal lines are blurred, smeared, pitched up pitched down and pitch bent until their content is cast adrift from their original context and they whisper their saccharin sweet nothings into the void. Forget central heating -- the radioactivity of this album is all that you'll need to keep you warm this winter. Product Reviews Burial, the self-titled debut album by an anonymous dubstep producer from London, proved one of the more surprising success stories of 2006.

It was voted Album of the Year by the influential experimental-electronic magazine The Wire and was fawned over by a long list of other media, from Mixmag to Pitchfork. Upon the release of Untrue, the second Burial album, the cycle of acclaim appeared likely to repeat itself. While Untrue isn't likely to win many, if any, Album of the Year honors (in the wake of the debut's acclaim, the novelty of Burial lessened considerably), the album's arguably even better than its predecessor.

Untrue finds its anonymous producer streamlining the varied approach of his debut, resulting is a uniform collection of tracks that are subtly evolving variations of each other. Following an untitled, foreboding intro, Untrue kicks off with the simply melodic "Archangel" and culminates 45 minutes later with the majestic "Raver," a summary conclusion.

There aren't any MC-featuring tracks such as "Spaceape" as there were on the debut, nor is there any hard-hitting tech-step la "Southern Comfort"; instead, every track on Untrue seems cut of the same cloth, emphasizing ghostly vocal loops, shadowy ambient motifs, and the warped rhythmic signatures of 2-step. One of the key highlights is "Ghost Hardware," the closest the album comes to genuine dance music.

It's followed by another standout, "Endorphin," an ambient interlude that shimmers for three minutes, entirely free of beats, before the sub-frequency bassline of "Etched Headplate," one of the album's most melodic and memorable songs, cuts through the stillness. Untrue is most evocative when listened to in sequence, for the moods and characteristics of each track evolve as the album progresses.

Once "Raver" brings the proceedings to a close, though, it's the overall impression of the Untrue that stays with you, more so than any particular tracks. If you can appreciate the style of dubstep employed by Burial, it's easy to fall head over heels for Untrue, an album on which there are absolutely no mainstream-crossover concessions, no ego trips, and no willful stylistic variation -- an album where the music, a singular style of it, takes center stage with no distractions or sideshows, where there's never the urge to skip to the next track, because they're all part and parcel of the greater whole.