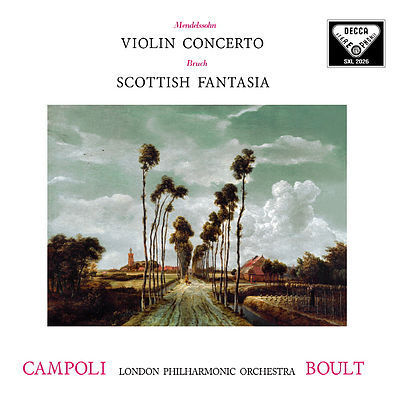 "Campoli plays most beautifully - the finale, in particula, is accurate and brillant in the xtreme.. Campoli's sweet-toned account of the Mendelssohn has given pleasure for many years. His lyrical feeling in the slow movement and his virtuosity in the finale are as self-evident as is the excellence of the accompaniment under Sir Adrian Boult. There are many felicitous ouches and the disincguished soloist plays magnifiently throughout. His account of the Brunch Scottish Fantasia is no less fine, and he recorded sound is amazingly fresh" - The Gramophone Magazine

Violinist Kan Boli (Alfredo Campoli) 1906 was born in Rome, when the family emigrated to Britain five years old, and under the guidance of violinist father fully demonstrated their extraordinary musical talent, not only to the troops involved in the posture of a child prodigy, participating more frequently Awards. Kan Boli adult meets the world economy during the Great Depression, playing style changed to light music mainly at the time also has a salon orchestra, the orchestra's first album is released by Decca recording. The World War II, Kan Boli route back to classical music, a series of recordings for the Decca recording remastered album number, becoming the most famous British violinist period.

This album is special package Kan Boli and conductor (Sir Adrian Boult) led by the London Symphony Orchestra playing wonderful recording, the recording time is between May 1958, recording place is famous Kingsway Hall. Kan Boli music album sounds through his highly recognizable, and playing style to fill the gap, making the album recording become Decca 2000 series, so fans, eager to collect the name of one of the disc