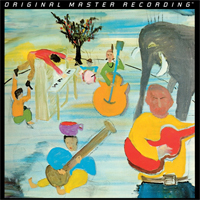 Mastered by Kreig Wunderlich from the Original Master  tape

buys you a Super Big Gulp of extra creamy analog. Levon Helm’s drumming, while somewhat subdued, is rich with texture in a way that few digital recordings manage to capture. Multipart harmonies dominate and come alive across the soundstage, bringing us back to a time in recording history before massive overdubs became the norm. All of which explains why this record stands the test of time, earning the 34th spot on Rolling Stone’s greatest albums of all-time list." - Jeff Dorgay, TONEAudio Magazine

Recorded in 1968, The Band’s Music From Big Pink stems from the same locale—a pink farmhouse in upstate Woodstock, New York—as the Basement Tapes and is just as rustic, timeless, and mysterious as Dylan’s celebrated work.

A debut for the ages, the album features two songs co-written with Dylan—“This Wheel’s on Fire,” “Tears of Rage”—as well as what’s universally recognized as the definitive version of Dylan’s “I Shall Be Released.” More famously, it also includes “The Weight,” a standard covered by everyone from the Grateful Dead to Weezer to Aretha Franklin. But the power of this set doesn’t lie in one song but the entire album.

A groundbreaking statement, Music From Big Pink lays bare the magnetism of the American South, Appalachian traditions, and country-rock innovations. That guitarist Robbie Robertson, Garth Hudson, bassist Rick Danko, drummer/vocalist Levon Helm, and organist Richard Manuel are all household names only adds to the proof of this must-have record’s everlasting appeal. This is the majesty of what Greil Marcus called “the old, weird America.” Half-speed mastered from the original master tapes and pressed at RTI, Mobile Fidelity's analog version practically gives you a spot on the floor at Big Pink as the sessions went down. Curl up, close your eyes, and listen as the music's sublimely organic sounds appear with full-range dynamics, life-size imaging, and tremendous soundstaging. This is one of the reasons why you have a turntable. Prepare for your system, and your ears, to glow.  "So finally, after all of these years we have the penultimate Music From Big Pink. It's got the bass, it's got the proper top end, it has the mids correct and it gives you all of the space and low level detail missing from every other edition, though the original Capitol isn't bad in that department.

This is a "must have" album on the "must have" version. Mobile Fidelity has had its share of hits and misses. This is one of the hits. Don't miss it." - Michael Fremer,  Music 10/10, Sound 10/10!   buys you a Super Big Gulp of extra creamy analog. Levon Helm’s drumming, while somewhat subdued, is rich with texture in a way that few digital recordings manage to capture. Multipart harmonies dominate and come alive across the soundstage, bringing us back to a time in recording history before massive overdubs became the norm. All of which explains why this record stands the test of time, earning the 34th spot on Rolling Stone’s greatest albums of all-time list." - Jeff Dorgay, TONEAudio Magazine,  Features: • Numbered, Limited Edition 33rpm Edition • Half-Speed Production and Mastering by Mobile Fidelity Sound Lab • Specially Plated and Pressed on 180 grams of High Definition Vinyl • Pressed at RTI • Special Static Free - Dust Free Inner Sleeve • Heavy Duty Protective Packaging • Mastered from the Original Master Tapes 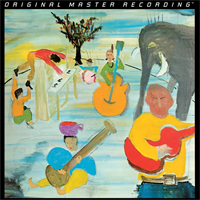