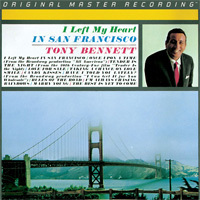 Sonic Clarity and Presence Will Blow Your Mind!

Half-Speed Mastered from the Original Master Tapes: Sonic Clarity and Presence Will Blow Your Mind! Tony Bennett I Left My Heart In San Francisco on Numbered Limited Edition 180g LP from Mobile Fidelity. A Performance for the Ages: Landmark 1962 Vocal Pop Set Established Bennett’s Career. Bennett Has Never Sounded Better on Any Record!

Can there really be a definitive album from a singer whose voice is one of the most immediately recognized and internationally cherished, and whose command of songs is akin to the manner in which an able-bodied masseuse handles delicate muscle tissues? If so, then I Left My Heart In San Francisco is that record, the 1962 effort a turning point for the great Tony Bennett and an all-time pop standard.   Half-speed mastered from the original master tapes, Mobile Fidelity’s numbered limited-edition 180g LP presents Bennett in the finest sound he’s ever enjoyed. Amazingly, this landmark recording has lavished in the vaults over the years and longed for the restoration that meticulous engineering can bring. Gone is the veiled haze that hung over the orchestrations, artificial ceiling that held back the highs, and cloudiness that obscured the entire range of Bennett’s vocals. Previously unheard levels of warmth, expressiveness, and detailing are just some of the hallmarks of this terrific audiophile delight. At the time of the album’s sessions, Bennett found himself caught between the need to sing thin up-tempo numbers in order to appease the marketplace and the desire to move beyond the jazzier material he tackled in the late '50s. Unwilling to compromise his will to sing ballads and swing, Bennett, along with producer Ernest Altschuler and arranger/pianist Ralph Sharon, found the perfect combination on I Left My Heart In San Francisco, replete with expansive orchestration, period echo, anthemic ballads, and lush pop arrangements that still leave plenty of room for intimacy and delicacy.  There’s little left to say about the timeless title track, amidst the most definitive songs ever recorded. Similarly, the closing “The Best Is Yet to Come” ranks equally high, with Bennett’s rendition coming a full two years before Frank Sinatra’s version. It’s no wonder why The Voice deemed Bennett his favorite singer. The proof is everywhere, whether on the brassy “Rules of the Road,” big-band bossa nova send-up of Cole Porter’s “Love for Sale,” tender “Have I Told You Lately?,” or the white-gloves treatment of the Broadway tune “Once Upon a Time.” Bennett’s charismatic personality and refined singing ring true throughout, his burnished baritone as clear as spring water  Now, hear this triumphant performance as if Bennett is singing to you on a private stage. Witness every breath, and experience the thrill of the singer holding a note for what seems like eternity on “I’m Always Chasing Rainbows” without flinching. Seldom, if ever, has a vocalist’s singing sounded so effortlessly natural and innate. Mobile Fidelity’s 180g LP is simply unmatched in terms of sonics, spaciousness, and sensation.  One of the five-best vocal albums ever made.

• Numbered, Limited Edition • Half-Speed Production and Mastering by Mobile Fidelity Sound Lab • Specially Plated and Pressed on 180 grams of High Definition Vinyl • Special Static Free - Dust Free Inner Sleeve • Heavy Duty Protective Packaging • Mastered from the Original Master Tapes Selections:
Side A:  1. I Left My Heart In San Francisco 2. Once Upon A Time 3. Tender Is The Night 4. Smile 5. Love For Sale 6. Taking A Chance On Love Side B:
1. Candy Kisses 2. Have I Told You Lately? 3. Rules Of The Road 4. Marry Young 5. I'm Always Chasing Rainbows 6. The Best Is Yet To Come 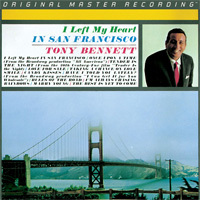