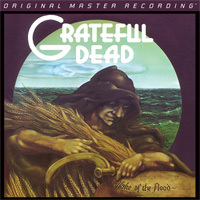 Half-speed mastered from the original master tapes and part of the label’s unprecedented Grateful Dead reissue series, Mobile Fidelity’s numbered limited edition 180g LP of Wake of the Flood presents the Dead’s family-styled blend in supreme fidelity. More than any other Dead studio effort, Wake of the Flood utilizes the myriad alternatives offered by the studio setting. Recording to 24-track, the group invited no fewer than six horn players to the fray, with saxophones, trumpets, and trombones synching up with the six-piece band on two songs. In addition, virtuoso violinist Vassar Clements makes a guest appearance and Texas legend Doug Sahm lays down 12-string guitar, contributing to an amalgamation that’s nothing short of epic in ambition—and, in the case of the thematic “Weather Report Suite,” epic in length. Mobile Fidelity’s engineers recognize how beloved this iconic effort is to so many people. Approaching the mastering process with the same type of focus, perception, and foresight that the Dead bring to the compositions, their painstaking work reveals previously obscured details, timbres, movements, and sounds that greatly add to Wake of the Flood. You can hear and sense it in terms of the LP’s poetic sensibility, arching scope, mythological illusion, and emotional impact, all as natural as the rustic images portrayed on the album’s artwork. Bass fanatics, take note: During the sessions, Phil Lesh was in the midst of utilizing an Alembic “Quad” bass equipped with four pickups to allow each string to be recorded individually, or, one per track. The oceanfloor-deep bass frequencies on this pressing will loosen anything not properly tethered in your room. Jerry Garcia, too, debuts a new Alembic-produced guitar on the album; his rich tonalities swim in the currents of every song here. And every tune here is first-rate, good ol’ Grateful Dead. Two separate albeit symbiotically related songwriting teams — Garcia/Hunter and Weir/Barlow—guide excursions into forget-all-your-troubles country-rock (“Mississippi Half-Step Uptown Toodeloo”), spirit-boosting funk-cum-psychedelia (“Eyes of the World”), mournfully bracing blues balladry (“Stella Blue), and reassuring folk-rock (“Here Comes Sunshine”). Akin to the album’s overall mood, the latter track progressively unfolds, each passage blooming with additional optimism, fortitude, and purpose. Similarly, the lyrical clouds and thunder ultimately pass on Weir’s beautifully complex and terrifically executed three-part “Weather Report Suite,” a team effort that represents one of the rare occasions of the Dead pairing with a horn section. A live favorite for many years, the tune never possessed onstage the atmosphere-filling soundscapes and theme-enhancing instrumental elements that it does here. Is there a better way to conclude a masterpiece that subconsciously reflects dawning of a new era and the indefatigable hope that comes with it? Doubtful. Bask in the glory that is Wake of the Flood with this incredible 180g LP pressing! Features: • Numbered, Limited Edition • Half-Speed Production and Mastering by Mobile Fidelity Sound Lab • Specially Plated and Pressed on 180 grams of High Definition Vinyl • Special Static Free - Dust Free Inner Sleeve • Heavy Duty Protective Packaging • Mastered from the Original Master Tapes Selections:
Side 1:  1. Mississippi Half-Step Uptown Toodeloo 2. Let Me Sing Your Blues Away 3. Row Jimmy 4. Stella Blue Side 2:
1. Here Comes Sunshine 2. Eyes Of The World 3. Weather Report Suite: Prelude Part I Part II (Let It Grow) 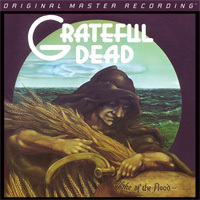