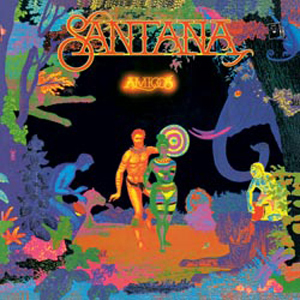 Speakers Corner vinyl re-mastering of Amigos is exceptional. The stereo separation is flawless and the subtle counterpoint interplay between rhythm and melodic instruments is balanced with deft precision. Santana’s guitar is prominent and never buried by the denser layers of sound. Both the piercing and fluid tonalities are captured with vibrant results. The mind-blowing artwork by Tadanori Yokoo represented on full-sized double front-back and inside panels glows radiantly with glossy luxuriance.- Sound 5/5 Audiophile Audition

Santana’s music is like the game of Mikado – a tight bundle of pieces in various styles that is difficult to handle, even for experienced musicians. No whether the sticks are labelled funk, jazz, rock, R & B, or folk: when you try to pick out just one of these, the whole lot vibrates alongside.

It seems relatively simple (and is often attempted) to try and sort out track lists according to more or less commercially oriented compilations. And having fastidiously set up the ranking and astutely discussed it in your circle of friends, you can sit back and enjoy the brilliant guitar sound of such blockbusters as "Caravanserai" or "Welcome" – quality rules the day!

In his seventh album the guitar guru is once again surrounded by numerous freshly recruited supporting musicians and the star producer David Rubinson. The latter watches carefully over the development of this project, which is highly reminiscent of the early Santana sound. A perceptible infatuation with the vocals, or the wealth of buzzing, pulsating, clattering, clicking rhythms, or yet again the inimitable bubbling, frothy guitar solos: a Santana LP is simply unthinkable without all this. Why then should one try to pick out the various styles, genres or consumer groups when this record belongs to his best and most important six, seven – or maybe even eight?

At the end of the day, we all remain amigos with Santana. 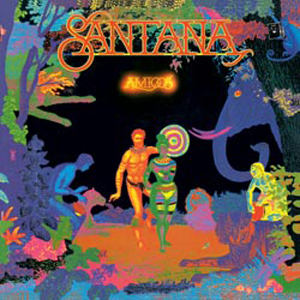