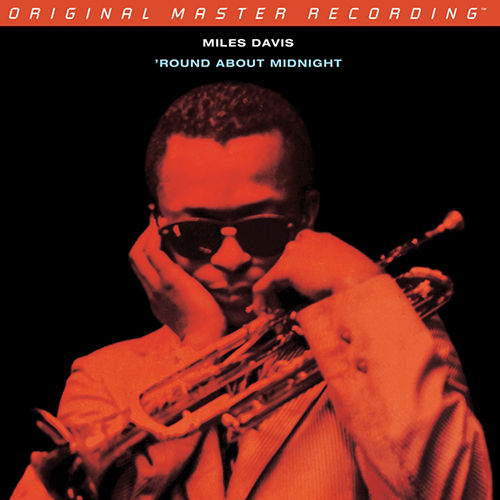 MoFi has hit the ball out of the park with these reissues. They are essential listening -- and purchases. TheAudioBeat Review

Blowing Cool and Hot Jazz: Quintet Plays Reflective Ballads, Pop Standards, and Fervent Bop on One of Era’s Only Complete Start-to-Finish Full-Length LPs. Miles Davis’ first album for Columbia, ‘Round About Midnight, represents both the beginning of a three-plus-decade relationship with the famed label as well as the start of an extended collaboration with then-unknown saxophonist John Coltrane.

As one of the era’s only complete start-to-finish full-length LPs, the 1957 set stands as a hard-bop benchmark—a summation of the styles that came before its creation, an immersion into the period’s cutting-edge strains, and a hint of the rivoluse modalism that would follow. Part of Mobile Fidelity’s Miles Davis catalog restoration series, ‘Round About Midnight now resonates with a physical palpability and emotional heft never before experienced. Mastered from the original master tapes and pressed at RTI, this unsurpassed 180g LP edition traces the individual paths each musician takes in contributing to the whole, whether it’s pianist Red Garland’s left hand spinning actinoid chords or Coltrane infusing a tune with harmony-defying fills that suggest arabesque patterns.

Recorded at three separate sessions, the music has never sounded so cohesive, immediate, or involving. Historically, few jazz records claim the significance boasted by ‘Round About Midnight. The album’s creation—and the assembly of Davis’ quintet, which also includes Paul Chambers and Philly Joe Jones—stems from the headliner’s rousing rendition of the title-inspired track, “’Round Midnight,” a Thelonious Monk standard, at the 1955 Newport Jazz Festival. Stunning the audience with an interpretation that witnessed him personalize the composition with a brooding tone made possible via employment of his soon-to-be-trademark Harmon mute, Davis redefined perspective and possibility, taking ownership of the ballad as his own, and further improving upon its reach in the studio.

It wasn’t the composer’s only surprise. 'Round About Midnight thrives due to diversity and consistency, a rare combination epitomized by the first-rate selection and astonishing performance of pensive ballads, bebop classics, pop standards, and folk pieces. Witness the counterpoint exchanges during “Ah-Leu-Cha” and its Dixieland shades. Soak up the progressive drama and swinging tempos on “All of You” and “Bye Bye Blackbird.” Delight in the mélange of latticed textures and schematic moods throughout the sequence, here presented in gorgeous fidelity, zeroing in on Davis’ warm, plush, rich, and close-up trumpet timbres and how, by playing his instrument right near the microphone, he infuses the arrangements with the sort of daring intimacy embraced by two lovers. Tension, suggestiveness, calm, mystery, nostalgia: All here. Gather now, ‘Round About Midnight. Slip on a pair of shades, draw the curtains, slouch into a chair, and light a cigarette.

This is Miles and Co. at their best. Hipness personified. 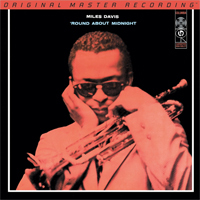