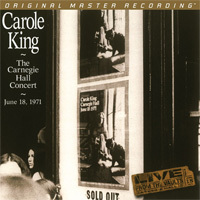 The recording by Hank Cicalo is superb. It captures just enough of the hall sound to bring you to the concert, yet the perspective is sufficiently close to produce the feeling that you've got the best seats in the house. If the reflective hall doesn't sound a bit hard, your system is too soft! This is pure live concert music making of the highest order, recorded to perfection. A gem of a time capsule and considering the price of a concert ticket today, this LPis of course a bargain. Michael Fremmer Analogplanet

Every so often, a from-the-vault release captures our hearts, minds, and attention in such a way that it’s impossible not to tell all family, friends, and neighbors about its existence. Originally issued to commemorate the 25th anniversary of Tapestry, Carole King’s The Carnegie Hall Concert: June 18, 1971 is such a record, a fortunate document of an absolutely magical period in the singer-songwriter’s legendary career and a revealing look at the then-stagefright artist turning in a commanding performance just as she was becoming a superstar.

Half-speed mastered from the original tapes, Mobile Fidelity’s numbered limited-edition 180g LP of this compelling concert album brims with liveliness, depth, dimension, detail, and transparency. The nuances of King’s spare performances and warm vocals emanate as if she’s sitting five feet away. Stripped down even further than they are on the studio albums, songs breathe with palpable earnestness and emotion, the subtle differences from their more polished studio brethren allowing listeners an insight into King’s creative genius.

At the time of its recording, King still suffered from shyness—and who could blame her? She had been accustomed to penning lyrics for other artists and sitting behind a desk in the Brill Building. Only recently did King strike out on her own and enter the public realm. This set encapsulates this contrast in thrilling fashion. Disarmingly genuine and daringly honest, The Carnegie Hall Concert: June 18, 1971 benefits from the inclusion of King’s nervous between-song banter that exposes who she is as a person and performer. Most importantly, despite her anxiety, she turns out stirring renditions of tunes from 1970’s Writer, Tapestry, and even a few from the yet-unreleased Music (also available from Mobile Fidelity MFSL 1-352).

Her control is demonstrated on the record’s six opening cuts, which feature King alone at her piano. For the remainder of the program, she’s accompanied by guitarist Danny Kortchman, bassist Charles Larkey, and a string quartet, which enter and exit according to arrangement. As such, the concert is profoundly intimate and personal, an “unplugged” session that predated the use of the term by nearly two decades. Longtime collaborator James Taylor joins her for a memorable medley of some of her biggest hits—“Will You Love Me Tomorrow/Some Kind of Wonderful/Up on the Roof”—the chemistry evident of why the duo’s 2010 tour was one of the most in-demand outings in years.

Mobile Fidelity’s remastered sound ties everything together and is what makes this release extra special. By going to the original source, the audiophile label considerably opens up the sonic perspectives, revealing the spacious acoustics of the famed venue that act in concert with King’s music. In particular, the songs from Writer benefit from the no-nonsense production. You can literally picture King’s piano beside her, and her voice—sincere, tender, melodic—is rich, full-bodied, and penetrating. Listeners can even hear it crack on occasion, the results a consequence of her nerves. Unpolished and non-synthetic, the performance is better for it.

No, they don’t make albums like this anymore. The Carnegie Hall Concert: June 18, 1971 as real as it gets. And so is the sound. Get your collectible copy now

Live Release Captures Iconic Singer-Songwriter at Height of Her Breakout Period Mastered from the Original Tapes:

• Mastering by Mobile Fidelity Sound Lab • Specially Plated and Pressed on 180 grams of High Definition Vinyl
• Special Static Free - Dust Free Inner Sleeve • Heavy Duty Protective Packaging
• Mastered from the Original Master Tapes • Pressed at RTI
Bass – Charles Larkey
Vocals - Carole King
Engineer – Hank Cicalo
Guitar – Danny Kortchmar
Carole King The Carnegie Hall Concert: June 18, 1971
Track Listing:
Selections:
Side One:
1. I Feel The Earth Move
2. Home Again
3. After All This Time
4. Child Of Mine
5. Carry Your Load
Side Two:
1. No Easy Way Down
2. Song Of Long Ago
3. Snow Queen
4. Smackwater Jack
Side Three:
1. So Far Away
2. It's Too Late
3. Eventually
4. Way Over Yonder
5. Beautiful
Side Four:
1. You've Got A Friend - Performed with James Taylor
2. Medley:
Will You Still Love Me Tomorrow? - performed with James Taylor
Some Kind Of Wonderful - performed with James Taylor
Up On The Roof - performed with James Taylor
3. (You Make Me Feel Like) A Natural Woman 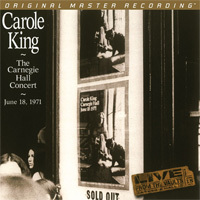