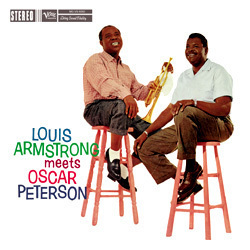 Thoroughly enjoyable and otherwise well-recorded Armstrong set. Louis Armstrong Meets Oscar Peterson provides a guaranteed emotional pick-up in genuinely dreary times.Sound 8/10 Music 8/10 Analogueplanet Michael Fremer
In the second reissue of the Acoustic Sound Serieshas done a stellar job in re-mastering Louis Armstrong Meets Oscar Peterson to 180-gram vinyl. The new mix (Ryan Smith/Sterling Sound) is especially appealing. Armstrong’s edgy vocal tonality is more smooth and fluent, centered directly. Instrumentation never overshadows the singing. A hi-gloss gatefold packaging and upgraded protective sleeve underscore the superior quality of this series Sound 4.5/5 Audiophileaudition
"Recorded in July and October of 1957 by Verve's house recording engineer Val Valentin, the album was released in mono in 1959, followed shortly thereafter by a stereo release. This reissue comes from Universal Music, Despite the mono cover and labels, it is in stereo. It has some of the attributes of early stereo. Armstrong is in the middle with piano in the left channel, bass, and guitar in the right channel. However, unlike many stereo recordings of the 1950s, the three channels are well blended, and there are no vast gaps of air between the soloist and instruments. Indeed, the presentation is far superior to my original mono copy which sounds flat and uninvolving by comparison. It is not as great sounding as the Ella collaboration albums, as Armstrong stands too close to the microphone, adding some modest overload at points. The mastering, by Ryan Smith of Sterling Sound, adds sparkle and texture which are missing with the original. The 180-gram pressing is beautifully flat and quiet — an outstanding musical performance with improved sound — just what a reissue should provide." Recording = 8/10; Music = 9/10 - Dennis D. Davis, Hi-Fi +
The 1959 session Louis Armstrong Meets Oscar Peterson is a result of Verve founder Norman Granz’s desire to bring together musicians from different backgrounds. (He produced the Jazz at the Philharmonic jam sessions.) Oscar Peterson, he believed, could fit in anywhere. Although this LP isn’t my favorite Armstrong from the period, Granz (whose name in the original notes is misspelled 'Grans') makes his point. The twelve ballads recorded here include numbers Armstrong had never previously recorded. The emphasis is on Armstrong’s vocals. When he takes a trumpet solo, he sounds almost polite, as if unwilling to burst the bubble of the recording studio. Peterson is garrulous as usual, but doesn’t offer the kind of  robust counterweight Armstrong is used to with his All Stars. There are no blues, but the songs are top notch. The record begins with 'That Old Feeling.' When Armstrong starts to sing, all is forgiven. He is just there, startlingly present. He’s my favorite male jazz singer: I even like the way he clears his throat on 'Let’s Fall in Love.'" — Michael Ullman, The Arts Fuse
Mastered by Ryan K. Smith at Sterling Sound from the original analog tapes
180-gram LPs pressed at Quality Record Pressings!
Stoughton Printing gatefold old-style tip-on jackets
Seeking to offer definitive audiophile grade versions of some of the most historic and best jazz records ever recorded
Louis Armstrong Meets Oscar Peterson is a brilliant undertaking in which Verve's legendary "house pianist" encountered one of jazz's most revered giants. A significant part of Peterson's genius was his ability to be an exceptional pianist and leader, while also being a perfect accompanist when the circumstance demands... and in a situation like this, to be both. Armstrong is not only recognized as one of the most innovative, singular, fascinating and beloved artists of the 20th century, but also one of the most generous in the way he embraced and stimulated his collaborators. Backed by the Oscar Peterson Trio — bassist Ray Brown and guitarist Herb Ellis, and augmented by frequent fourth member Louis Bellson on drums — these peerless heavyweights created an album that is utterly compelling, radiantly jubilant and consummate in artistry.
The musicians provided the setting for the jewel that is Pops, with Peterson perfectly embellishing every phrase Armstrong sings or plays. The focus here is primarily upon his totally personal and thoroughly captivating vocal style, with his occasional trumpet solos limited in all but one case to a single chorus. Essentially culled from the Great American Song Book — Cole Porter, the Gershwins and Harold Arlen among the songwriters — the pieces range from poignant ballads and blues to effusive easy-grooved swing. Each song is an exquisitely crafted gem that will warm the heart and enrich the soul.
Bass – Ray Brown
Drums – Louis Bellson
Guitar – Herb Ellis
Piano – Oscar Peterson
Supervised By – Norman Granz
Vocals, Trumpet – Louis Armstrong
Side 1
1. That Old Feeling
2. Let's Fall in Love
3. I'll Never Be the Same
4. Blues in the Night (My Mama Done Tol' Me)
5. How Long Has This Been Going On?
6. I Was Doing All Right
Side 2
7. What's New?
8. Moon Song
9. Just One of Those Things
10. There's No You
11. You Go To My Head
12. Sweet Lorraine 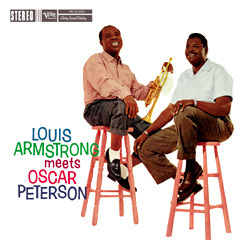