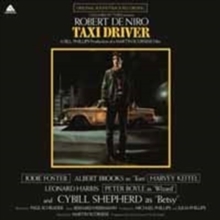 Taxi Driver" is regularly cited by audiences, critics, and film directors alike as one of the greatest films of all time. The music by legendary composer Bernard Herrmann was his final score before his death on December 24th, 1975.

Nominated for four Academy Awards, including Best Picture, the film was considered "culturally, historically, and aesthetically significant" by the U.S. Library of Congress and was selected for preservation in the National Film Registry in 1994.