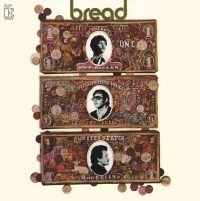 Founded by David Gates and James Griffin, Bread was one of the most popular pop/soft rock groups of the early 1970s. The band proved on their eponymous debut album (1969) that they were excellent songwriters and craftsmen of their instruments (keys and guitar, respectively).

Although the album did not contain a hit single at the time of release ('It Don't Matter To Me' later became a hit but only after their second album release 'On The Waters') it set the course for the group's fame and fortune. Ironic fact: the album's cover art would prove to be somewhat of an omen regarding the relationship of Gates & Griffin they later split several times, citing 'artistic ownership' feuds.