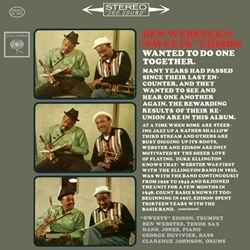 Mastered from the Original Master Tape by Bernie Grunman

One doesn’t mind a bit the more-frequent up-and-down required for 45 rpm discs when the playing and the sonics are at this heavenly level! Sound 5/5 Audiophileaudition

Another solid performance featuring Ben Webster playing with his friend Harry "Sweets" Edison. Recorded in 1962, this is a must hear for music lovers and audiophiles alike. It's doubtful that there have been two jazz musicians more suited to record together than Ben Webster and Sweets Edison. Alumni of the Ellington and Basie bands respectively, these two mainstream swing players have marvelous chemistry on this session. The charts are perfect vehicles for Webster's warm tone and silky phrasing as well as Edison's blues-ridden melodic style that matured in the mid- and late 1950's. Most of the tunes swing hard anchored by a solid Basie-esque rhythm section. You'll wear this one out.

The two jazz giants Ben Webster and Harry "Sweets" Edison had long wanted to record an album together, and in 1962 it came to fruition with excellent accompaniment from Hank Jones (piano), George Duvivier (bass) and Clarence Johnston(drums). Although associated with two different orchestras (Edison/Basie and Webster/Ellington), these two swing kings found that they indeed had a lot in common! For evidence of this classic pairing look no further than these sides! This album features both horn men on three medium tempo blues numbers "Better Go," "Kitty," and "Did You Call Her Today." In addition, Webster gets two tenor features, contributing absolutely luscious solos on both "How Long Has This Been Going On" and "My Romance." After listening to these songs, there can be no doubt that Webster is one of the best balladeers jazz has ever produced.  Edison also gets his moment in the sun as well on the album closer which finds Sweets playing a wonderful, even fairly modern sounding, rendition of "Embraceable You" using a Harmon mute. The ballads, enhanced by the wonderful harmonic sense of pianist Hank Jones, are the highlight of this release, and show both Webster and Sweets' unbeatable melodic sense. Ben Webster was considered to be on of the three most important 'swing tenors' along with Coleman Hawkins and Lester Young. Known by some as "The Brute," he had a tough, raspy and brutal tone on stomps but could deliver warmth and sentiment on softer ballads.  Trumpeter Harry "Sweets" Edison spent his early childhood in Kentucky where he was introduced to music by his uncle. After moving back to his hometown of Columbus, Ohio at the age of 12, he began playing the trumpet with local bands, eventually landing a spot with the Count Basie Orchestra.  Mastered by Bernie Grundman from the original analog master tapes and pressed at RTI! Numbered deluxe laminated double gatefold jackets. Only 2500 numbered limited edition copies worldwide!

Now for the first time we can hear it almost like we were there in the Columbia Studios with the jazzmen, in these fantastic remasterings by Bernie Grundman from the original Columbia analog master tapes... [S]ome of the best jazz ever played and recorded in some of the ultimate sonics... The rich and deep tone of Ben Webster’s sax makes every ballad he plays sound like the only version of that tune we should ever pay attention to. There’s something so right and yet so identifiable about his sound, and due to the extended fidelity possible at the 45 rpm speed, his sound is cleaner and with more presence than any other recording format... One doesn’t mind a bit the more-frequent up-and-down required for 45 rpm discs when the playing and the sonics are at this heavenly level!" - John Henry, audaud.com, 5 Stars! Musicians:
Ben Webster, saxophone
Harry "Sweets" Edison, trumpet
Hank Jones, piano
George Duvivier, bass
Clarence Johnston, drums 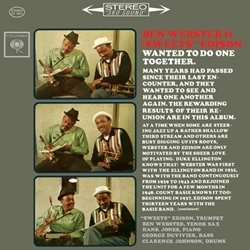