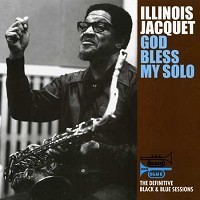 Mastering by Greame Durham at the Exchange - 33.167 Black And Blue

"Jacquet's big tenor sax sound comes on strong from the first beat and never lets up in this outstanding release from the French Black & Blue label…great sound married to a terrific performance. Every cut is outstanding…Pure Pleasure has done a good job of selecting a little known gem, mastering it well and pressing it on pristine Pallas vinyl. This is one of their best releases." Recording = 9/10; Music = 9/10 – Dennis D. Davis, Hi-Fi+

The solo referred to in the title, God Bless My Solo, is that in "Flying Home" made Illinois Jacquet into a Decca Records microphone in May 1942. This solo became one of the two or three most influential solos in all of jazz history, an 80-second masterpiece. Nearly every tenor player who followed made it a priority to learn that solo, note for note. But "Flying Home" marked neither the beginning nor the end of Jacquet's seven-decade career. He was one of jazz's great survivors, thought of as an outrageous musician when he was young but hailed as a classic figure in old age. He was as effective with romantic jazz ballads as he was with the explosive performances with which he made his reputation. Tenor saxophonist Illinois Jacquet is heard in top form throughout this quartet set, recorded for the French Black & Blue label, whilst touring throughout Europe in the 1970s.

The album title refers to Jacquet’s 80 second “Flying Home” solo recorded during a session for Decca records in 1942 that is considered one of a handful of the most influential solos in jazz history. Jacquet repeats it here, adding some new twists.
Another highlight is a soulful original ballad “You Left Me All Alone” that follows the opening romp, “Jean-Marie’s Den,” another Jacquet original.
The recording is similar to the Concord studio style of the time: fairly closely miked, probably heavily partitioned, with reverb added after the fact. The emphasis is on clarity, not atmosphere. There’s no attempt to create a realistic soundstage. Instead the drums are splayed mid-stage to stage left and the piano is larger than life, growing in size for the solos. Most importantly, Jacquet, then 56 years old, is in fine form both on the soft ballads and hard blowing numbers. The overall tonality is on the pleasingly soft and warm side, but without smothering the instruments.
Nothing earth shattering here, either sonically or musically and certainly not the sonic equivalent of Birthday Party, but a fine reissue that should please Jacquet fans who will be able to hear the veteran well-recorded and upfront in the mix, especially the re-creation of his famous solo.
The 1970s were a great time to be a jazz fan in France and throughout Europe. Whereas in the States, jazz had fallen on hard times with big bands disbanding and rock and disco to follow, taking over the airwaves, jazz musicians were welcomed as heroes in Europe. Many of the jazz greats appreciated the adulation and moved to the continent to enjoy work  the European scene. The Black and Blue recording label under their series, The Definitive Black and Blue Sessions, has put out an extensive series of recordings remastered for CD, featuring American jazz greats either playing together or with French sidemen. Remastered quality has been consistently high, and jazz collectors are always on the lookout for these CDs.
To sweeten the pot considerably, Pure Pleasure Records out of Britain has reissued some of these sessions in glorious 180 gram vinyl. They lack the extra tracks that the Black and Blue CDs feature, but the sound is so warm and in-the-room soundwise, that it is worth the $25-30 premium price.
Such is the case with Illinois Jacquet’s God Bless My Solo, from a Barclay studio March, 1978 issue. We’ve got the best accompanist in the business in Hank Jones, who never hit a wrong note and swings more with fewer notes than most any other pianist. In Duvivier and Heard, the ideal rhythm section is found for Jacquet’s bluesy solos. As did Buck Clayton on trumpet, Illinois Jacquet drips soul and swing feeling.
We get the pure pleasure of Illinois reprising his famous solo style of Hampton’s Flying Home on the title track, God Bless My Solo. On Ellington’s Things Ain’t What They Used to Be, Jacquet matches Hodges for honors with his tenor version approaching Johnny’s definitive version. Not to be outdone in bringing other sax icons to mind, Illinois throws us a little Pres on Jean-Marie’s Den.
With so much mediocrity on sale at $15-18 a shot at your local CD emporium, spend the extra few bucks to get pristine sound quality and jazz masters showing their genius on Pure Pleasure Records audiophile vinyl LPs. A few less lattes and it’s all yours in collectible fashion. 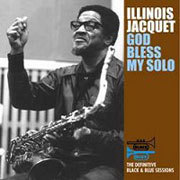