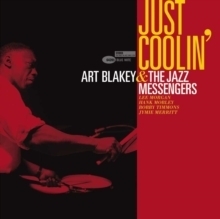 The session for Just Coolin' finds The Jazz Messengers' saxophone chair in transition. The band had last recorded in October 1958 when they cemented their place in jazz history with the classic album Moanin' featuring Benny Golson on tenor saxophone. By July 1959, Blakey had recruited tenor saxophonist Wayne Shorter who would remain a fixture of the band until 1964. The interim saw the return of Mobley, who was a charter member of The Jazz Messengers when the band first formed in 1954 and appeared on their debut recording The Jazz Messengers At The Café Bohemia in 1955. Mobley also filled an important role as the band's resident composer. In fact, three of the six tracks on Just Coolin' were written by Mobley: "Hipsippy Blues," "M&M," and "Just Coolin'."