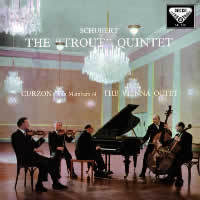 If you enjoy classical music on LP, you have to appreciate the steady diet of excellence from Speakers Corner. This LP was impeccably flat with nary a tick. Even the album cover is selfless, with little hint of origin beyond "Columbia Records." Keep ‘em coming! Whether you’re an ardent Schubert fan or just like to have a bit of every period in your classical collection, put this one on your list. - theAudiobeat

The recording is outstanding, During my research for the DG CD release, I listened to other performances, many of which had superior recordings, especially the excellent András Schiff, Alois Posch, and Hagen Quartet 1999 Decca CD release. Then I listened to this Vienna Decca LP. Truly remarkable. The 'presence' of the musicians, the immediacy of the hall, and sounding like no CD of the Trout you'll ever hear. The timbral accuracy of both piano and strings is uncanny. And with echt-Wiener style, unmatched. Problems? Short on time and some brief, dodgy intonation (sharp) from Johann Krump, Double-Bass. Other than that, a flawless LP and very highly recommended. Audiophilia

52 years after it was masterfully captured by the recording engineers at Decca, this recording of Schubert's 'Trout' Quintet by Curzon and members of the Vienna Octet remains polarizing. You either love or hate it. Hopefully this re-edition by Speakers Corner might help bridge some of the differences as it finally reveals the dense and rich sonorities the previous CD releases utterly failed at conveying. Technically, the octet is "in the room". The grunting double bass, agile fiddle and emotional cello are all well sized, well positioned and superbly voiced. A major complaint about this recording were the whiney violin and dry cello. The great news is that this vinyl re-edition proves once and for all that those where CD artifacts. Nothing now stands in the way of musical enjoyment . - 6Moons

But the music-making was of the highest order when I returned to comparatively uncompressed material—such as my favorite recording of Schubert's "Trout" quintet, by Clifford Curzon and members of the Vienna Octet (LP, Decca/Speakers Corner SXL 2110). -Stereophile

Sir Clifford Curzon and Members of the Vienna Octet

This performance has been much admired by critics since its arrival nearly 30 years ago. An English pianist and Viennese chamber ensemble make the most of Schubert's melodies and rapid changes of harmonic color. The sound quality of the record is like having the musicians in for an evening of music in your house. Recorded in Nov. 1957. John Culshaw, producer; James Brown, engineer. Rated 18/20 in London Blueback Guide.

In the summer of 1819, Franz Schubert stayed in the Austrian town of Steyr where he began work on the composition of the five-movement Piano Quintet in A major, op. 114 (D 667) which was commissioned by the cellist Sylvester Paumgartner. The work was completed in the autumn and soon achieved great popularity under the name of Trout Quintet, which it owes to the Andantino fourth movement – a set of variations on the song of the same name.

The work has remained highly popular right up to the present day and so it comes as no surprise to find this highly praised recording, made with such renowned artists as the pianist Clifford Curzon, the violinist Willi Boskovsky and other members of the Vienna Octet, being released once again.  The ensembles refreshing performance reflects the sparkling lightness and virtuosity of the work.

The well-balanced recording with its full tone certainly deserves a place in every music lovers collection. 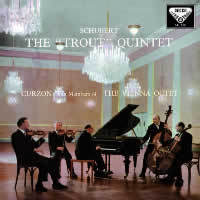