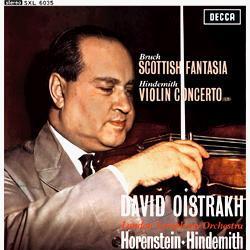 It seems rather obvious to us that audio publications -- print and online -- give away too many awards. At the end of each year, high-end audio begins to resemble a little-league team for which every player gets a trophy, sometimes for a dubious "achievement." It is for this reason that we present only two awards that reflect The Audio Beat's areas of emphasis: audio equipment and music. For music, Speakers Corner's Decca LPs were an easy choice. Speakers Corner not only used the true master tapes in the creation of its reissues, but also the actual equipment with which so many of the original pressings were created. Along with this, Decca engineer Tony Hawkins cut the lacquers. The results speak for themselves. We congratulate all of the winners -- of our awards, that is.  The Audio Beat

This whole LP is fantastic. Great orchestral playing and the soloist if beyond superb. The  sound is super with great sonority and lots of bass slam and hall ambience. Go get it now! Sweet violin tone that sounds very close. Oh the sound of the bow on the strings. What a sound! Rated 19 /20 in Robert Moon, Blue Back Guide.

Max Bruch’s Scottish Fantasia is a late-Romantic work which is seldom found on concert hall programmes today. One realises after listening to the piece for the first time that the composition proves to be at least as solid and artistic as all the other works of the composer.

The London Symphony Orchestra, conducted by Jascha Horenstein gives a sonorous interpretation of the melancholic which, according to Bruch, depicted an aged minstrel who, while gazing upon the ruins of an ancient keep, ponders over the splendid days gone by. The well-known slender but warm timbre of David Oistrakh’s violin is well suited to this music which was inspired by Scotland.

David Oistrakh demonstrates his versatility in this performance of Hindemith’s Violin Concerto, written in 1939, where he effortlessly mesmerises the audience with breakneck cascades of scales. With many years of experience in the performance of modern music, the London Symphony Orchestra, led by the composer himself, prove that they are a match for this work.

This Decca recording offers first class interpretations of two great masterpieces from differing eras that have been acclaimed widely and have reached far beyond the circle of Oistrakh fans.

"Hindemith's concerto has never before blossomed into such rewarding lyricism. Even the orchestral contribution under the composer himself is strikingly passionate and with the soloist to provide many moments when the ear is ravished by the beauty of phrasing and inflection, the listener has much to enjoy. The recording is one of the very finest ever made of the combination of solo violin and orchestra. The Oistrakh/Horenstein performance completely displaces its competitors. It is marvelously well recorded -- Oistrakh has never sounded so real on a disc before -- and the reading owes nearly as much to the conductor as the soloist. The expansive dignity of the opening of the brass sets shows immediately how fine the orchestral contribution is going to be and Oistrakh's playing throughout is ravishing, raising the statue of the work immeasurably. The slow movement is especially memorable." 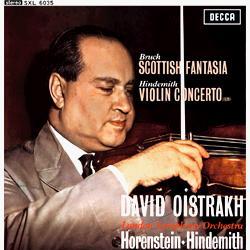