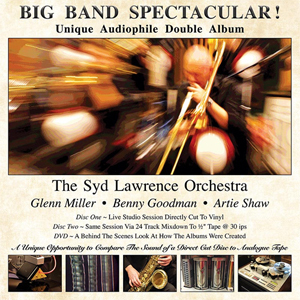 "This album of tunes by Glenn Miller, Benny Goodman, and Artie Shaw comes as close to being on the other side of the studio glass as I've heard from a recording in some time." - Michael Fremer, Stereophile Magazine

Mike made his first direct cut last year when he recorded the Four Seasons and that is a phenomenal record, the best sounding classical LP I’ve heard. But the dynamics on offer from a 16 piece brass/woodwind, piano, bass and drum powered band is in another league to a chamber orchestra. This release lets you know all about it without the razor sharp mid and treble normally associated with trying to capture this much energy on two channels. Highly recommended even if you’ve never heard of Glenn Miller, Artie Shaw or Benny Goodman. Jason Kennedy The Ear Review

"Both discs sound extraordinarily vibrant, alive, and real, and if the comparison between tape and D2D wasn't so instantly available you would be more than happy with the tape based version that was cut from 24 track, two-inch tape mixed down to half inch tape at 30 IPS. But putting on the D2D reveals just how incredibly natural, warm and effortless vinyl can sound at its best. This pressing has a depth and richness of tone that's irresistible, and even seems to 'time' better than its tape-mastered counterpart. Given big bands were all about precise timing, that's saying a lot!" - Hi-Fi+ Magazine

As well as great sound engineering from Jake Jackson at the Air Recording studios in London, made famous by George Martin, it is the brilliance of cutting lathe engineer John Webber really excels in this recording for me. , this is an art. The operator needs to continually adjust the gap between each groove on the record; if the gaps between the groove are too small then the recording will be ruined as there won’t be enough depth in the groove for dynamics and stereo, and if the gaps are too great then you won’t fit four tracks on each side. Both LPs are excellent recordings, with frequency response and musicality showing off the true greatness of analogue. This is a truly good example of what an LP should be, and you will be able to decide for yourself which recording you feel is the best. For me, direct cut discs will always be my nirvana, and the extended frequency response and headroom on the 12″ plastic is apparent from the very start. This is a very special recording, and something I have absolutely no hesitation in recommending to hifi and music lovers alike. As Mike Valentine beautifully puts it “It’s better than sex, it’s wonderful.” HIFI Pig

About a year ago, I created a direct cut recording of Vivaldi’s Four Seasons (a truly remarkable slab of vinyl).  We were lucky enough to receive some great press and have now sold over two thousand copies worldwide.  This created the question of what to release next. I have always loved big band jazz and in particular, the music of Glen Miller, Artie Shaw and Benny Goodman. After doing some research, one band in particular kept coming out on top.

This was the Syd Lawrence Orchestra

With a direct cut the band has to play live from the first to the last track on each side.  Any mistakes and it is back to the beginning again. With all of their radio work and concert appearances, the band seemed to be ideally suited to the task.  I therefore approached their leader, Chris Dean and explained what I would like to do.  He was immediately excited with the idea of creating a record, as opposed to a CD, because a lot of the band’s followers have been asking when were they are going to release a vinyl record. Chris was also up for the challenge of the live recording approach.

A direct cut record
We contacted Air studios and I hired the same hall and technicians as I had used before on the Four Seasons recording.  In particular, John Webber , the cutting engineer was again available, as was the same sound mixer Jake Jackson  The day came round.  We all arrived at the studio and the vinyl gods must have been smiling on us, because everything went well.  We cut four tracks in the morning for side A and four tracks for side B in the afternoon.

I always want to push the envelope, so decided to release the album as a double LP.  The second LP to be created with a twenty four track two inch Studer tape recorder, running at 30 inches per second.  This we mixed down to my half inch tape, again running at 30 IPS, which became the master tape from which the second record was cut. This means that one record will be the direct cut and the second a record of exactly the same session cut from the analogue tape version.  People will therefore be able to compare these two techniques from exactly the same session, the direct cut, versus the more conventional analogue mix down and mastering version of events.  What will the differences be?  Well, hopefully, we should all know soon enough.

DVD:
Behind the scenes look at how the albums were created