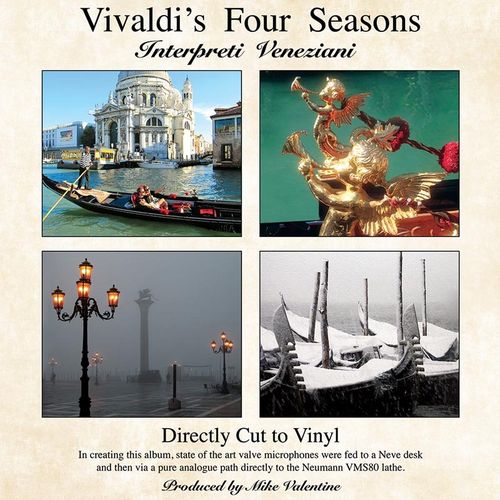 The playing is extremely vigorous in places, which adds to the dynamics and drama, and credit should be given to the nine musicians in Interpreti Veneziani and the many period instruments they play...It's the combination of the original sound, coupled with the shortness and purity of the signal chain, which make this such an astonishing record...a lot more robust that most I've heard." -Hi-Fi+ Magazine Sound 10/10

In this case the playing is spirited and unrestrained and the recording superbly transparent and three-dimensional, though those who prefer "purist minimally miked recordings" may prefer the more distant, "group in a space" kind of recording. For this kind of small, nine person ensemble, I think producer Mike Valentine's, "minimalist with some spotlight mike enhancement" approach works really well. The performance was captured at London's AIR Studios and recorded direct to disc to a Neumann VMS 80 lathe. The Gefell, AKG and Flea tube microphones fed an AIR custom Neve board. Record Industry pressed the 180 gram vinyl. The combination of D2D and perfectly quiet disc surfaces produce impressively wide dynamic swings that descend into pitch darkness and ascend to occasionally explosive heights (within the context of a small string ensemble).I've heard more intensely three-dimensional recordings of small string ensembles but if harmonic structure is King and transparency Queen, then this recording rules. Just don't play it at too high an SPL level. Despite the D2D inhibitions, the Interpreti Veneziani plays here with great spirit. There's also a nice balance of direct to reflected sound A superbly produced, engineered, performed and presented edition of the "Four Seasons". Sound 10/10 Music 10/10 Michael Fremer Analogplanet.

The first new direct-to-disc recording to come my way since I can’t remember when,this originates from a British company called
Chasing the Dragon by way of the Italian chamber group Interpreti Veneziani, which on this occasion numbers four violinists, a violist,a cellist, a double-bassist, a harpsichordist, and a solo violinist. According to the producer, Mike Valentine, the recording technology—a direct mike-feed to the cutting lathe, which once it begins cannot be interrupted without starting again with a new lacquer—dictated choice of repertoire, since a pair of seasons easily fits on perspective seems a bit close-up: I never felt I
was hearing an ensemble deployed realistically in a convincing space. Despite the absence of digital intervention, the tonal balance isn’t warm; on the contrary, it’s somewhat brightlylit, though very dynamic. Performance? The restricted instrumental complement took me a movement or two to get used to, but I did like the overall vigor and drive, not to mention the really strong, powerful attacks on tutti chords (“Winter” is quite sensational). This can hardly be a first recommendation, but if you hanker for a different Four Seasons, it might appeal. Paul Seydor The Absolute Sound Top Ten Records of 2016
On Friday 13th of June (we don't do superstition) AIR Studios hosted it's first ever (and perhaps the most ambitious of recent times) direct to disc recording of Vivaldi's Four Seasons performed by the leading Venetian Orchestra Interpreti Veneziani.
The project was the brainchild of Audiophile producer Mike Valentine, engineered by Jake Jackson live from AIR Studio 1 and cut straight onto master lacquer by John Webber via our Neumann VMS80 lathe. The purpose of working this way is to produce a vinyl release as pure and unprocessed as possible, skipping the convoluted electronics of tape or hard disc recording. Also Interpreti Veneziani are very fine musicians who impart a verve and fresh perspective into this famous concerto, something worth capturing in it's rawest form.
Four Seasons in one day
Spring & Summer were cut onto side A and Autumn & Winter onto side B. At 20 minutes per side this was very tight as cutting long sides without the tight packing of vary-groove can be tricky. "We knew we'd have to adjust the pitch (amount of groove lines cut over a set diameter) manually, saving space where possible" John states "Mike Valentine provided a CD version of the ensemble playing Four Seasons and this was used as a guide prior to the session; helping establish possible settings. At 96% disc space used from an approximate source we knew things would be tight on the day".
AIR's technical director Tim Vine-Lott provided balanced tie lines from studio one with John carrying out listening tests to ensure a good signal was getting up to the mastering room. Ray Staff was also on hand to offer wisdom and guidance prior to the session as one of the few engineers in the country who has done this before.
Talkback was setup between the two rooms and John cued the studio once the cutter head was down and lead in groove cut. There is no editing or stop/start possible in this process, Vinyl records are 'normally' one complete groove from start to finish.
How did it sound?
Mike Valentine is a big fan of the work of Doug Sax's & Lincoln Mayorja's Sheffield Lab recordings. The vision was to produce a truly unique and vibrant classical release on vinyl. This method, although technically risky (A problem with the cut or pressing could result in total failure) is certainly purest and eliminates the multi tracking stage entirely. A few microphones (including Mike's preferred Neumann M50 Decca Tree array) and two tracks straight from Studio One's Custom Neve 8056 were all that was used apart from a passive insert box, elliptical equaliser and the lathes electronics.
The sound of the test cut genuinely knocked everyone’s socks off. John says "The mids shone like I've never heard before, in fact they were quite forward so I asked Jake to back them off a bit on the console, I feel like this is what I want to hear every time from vinyl". Anyone who entered the room that day for a playback was in agreement that it sounded three dimensional and open. Certainly this is no gimmick, it's a wholly impractical and expensive way to work, but cutting straight to lacquer has an unequivocally pure but rich tonality and clarity. "With a clean, quite pressing we knew this would be great, there was excitement in the air that day" - Mike Valentine.
"The playing is extremely vigorous in places, which adds to the dynamics and drama, and credit should be given to the nine musicians in Interpreti Veneziani and the many period instruments they play...It's the combination of the original sound, coupled with the shortness and purity of the signal chain, which make this such an astonishing record...a lot more robust that most I've heard." -Hi-Fi+ Magazine
"String tones were rich and fully expressed..." -Stereophile
Valve Microphones - Gefell - Akg - Flea
Recording Desk - AIR Custom Neve
Cutting Lathe Neumann VMS80
Pressed at RT Holland
Producer - Mike Valentine
Recorded at AIR London
Musicians:
Giacobbe Stevanato, violin
Nicola Granillo, violin
Sebastiano Maria Vianello, violin
Pietro Talamini, violin
Anania Maritan, violin
Sonia Amadio, viola
Davide Amadio, cello
Angelo Liziero, double bass
Paolo Cognolato, harpsichord
Selections:
Antonio Vivaldi (1678-1741)
The Four Seasons
Side A:
Spring
1. Allegro
2. Largo
3. Allegro
Summer
4. Allegro
5. Adagio
6. Presto
Side B:
Autumn
1. Allegro
2. Adagio
3. Allegro
Winter
4. Allegro
5. Largo
6. Allegro