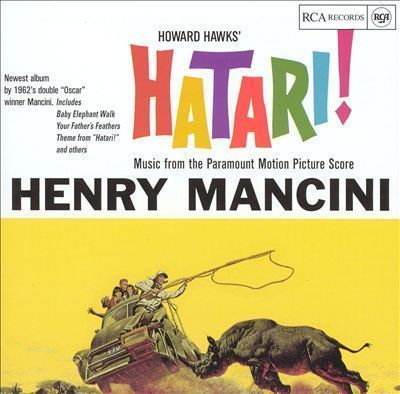 Coming off a double Oscar win for his Breakfast at Tiffany's score, Henry Mancini produced this score for the Howard Hawks-directed, John Wayne-starring safari comedy Hatari!.

Now Music from the Paramount Picture score Hatari! is back bigger and better than ever! The album has gone the deluxe Analogue Productions route - remastered from the original analog tapes by Ryan Smith at Sterling Sound, cut at 45 RPM, plated and pressed as a 200-gram 2LP at Quality Record Pressings. Then packaged in deluxe tip-on gatefold jackets from Stoughton Printing. A great title, a brilliant reissue. Exceptional!

"This is at first a fun blend of jazz and Afro-exotica, jungle drums mixed with a classic bop combo. Elsewhere, however, the soundtrack opts for some pleasant, but very Western jazz, only stopping for the African instrument-sampler "The Sounds of Hatari," which features some nice treated piano." -Ted Mills, allmusic.com