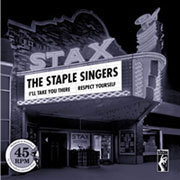 Analogue Productions introduced test pressings from their Stax Records reissue at the June 2003 Home Entertainment Expo in San Francisco. Among the exhibitors to show off their wares using these yet-to-be-released 45s was Richard Vandersteen of Vandersteen Audio.  "It was a big hit. The visitors packed the room every time we put it on. For once at one of these shows, there was some music that people wanted to hear. I mean, famous, classic music sounding incredible. It's just great old music that sounds much better than it ever had before. The people just loved it, and we loved playing it." - Richard Vandersteen, Vandersteen Audio “I’ll Take You There” (Side 1) A beautiful and now instantly-recognizable call-and-response chorus that scored a smash Number One hit on the Billboard charts of 1972. The backing instrumentation is simple with almost no changes. Atop that rock-solid foundation, we’re taken “there” with, “I know a place/Ain’t nobody crying/Ain’t nobody worried/Ain’t no smiling faces/Lying to the races/Help me (backing vocals: “I’ll take you there).” “Respect Yourself” (Side 2) The Staple Singers’ 1972 hit that rose to Number Two on the Billboard charts, and, along with “I’ll Take You There,” affirmed this Chicago group as stars of the soul and pop worlds. The song begins with a blues-tinged electric piano introduction and then builds to a crescendo full of inspiration. Pops Staples begins the lyrics with, “If you disrespect anyone that you’re running to/How in the world do you think anybody’s supposed to respect you/If you don’t give a heck about the man with the Bible in his hand/Just get out the way and let the gentleman do his thing.” Pops’ daughter Mavis, an absolute vocal giant, then takes over the vocals with, “If you’re walking ‘round thinking that the world owes you something ‘cause you’re here/You’re going out the world backwards like you did when you first come here/You curse around women but you don’t even know their name/Then you’re dumb enough to think it’ll make you a big ol’ man.”