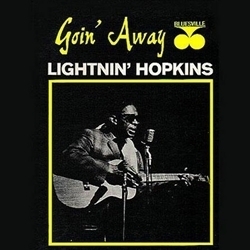 It sounds as if Lightnin’ Hopkins is playing and singing in your room. It’s spooky.  but the sound of blues-in-the-flesh - Tone Audio.

At times the guitar seems a bit low in the mix, but on this remastered Analogue Productions LP, cut from the original master tapes by Kevin Gray, it sounds warm and natural while the boisterous vocals have have a commanding presence; the recording also does a fine job of capturing Leonard Gaskin's deep bass tones and the timbre of Herbie Lovelle's brushes." — Music = 4.5/5; Sonics = 4/5 - Jeff Wilson, The Absolute Sound

Named a "Top Ten Vinyl Reissues of 2016" by The Absolute Sound!

Luckily, Analogue Productions is doing a couple of his in their Prestige reissue series. They are stereo recordings that were handled by none other than Rudy Van Gelder himself. Which explains why Goin’ Away sounds so damn good. Anyone paying attention knows that I think the Music Matters Jazz Blue Note reissues (perhaps Van Gelder’s most famous works) are the best thing to happen to vinyl in recent history, perhaps ever. And I also have some AP titles that are knocking on the door. Goin’ Away, as it turns out, is one of them. Whew! Sound 5/5 Hifedity

Part of the ultimate audiophile Prestige stereo reissues from Analogue Productions — 25 of the most collectible, rarest, most audiophile-sounding Rudy Van Gelder recordings ever made. All cut at 33 1/3 and also released on Hybrid SACD

For this 1963 Prestige Bluesville release, Lightnin' Hopkins is paired with bassist Leonard Gaskin and drummmer Herb Lovelle, who not only offer up a very sympathetic backing for his bare bones signature guitar style and instinctual rhythms, but provide some essential muscle as well along the way.The solid 8-song set consists of all Hopkins originals and finds the blues legend in fine form throughout, never more so than on the cuts "Stranger Here" and "You Better Stop Her."

Sam “Lightnin’” Hopkins, a true poet who invented most of his lyrics on the spot and never seemed to run out of new ideas, was a blues giant of post-war blues whose style was rooted in pre-war Texas traditions. While he cranked up his amp to fierce proportions when performing for his friends at Houston juke joints, producers who recorded him for the so-called folk-blues market usually insisted that he use an acoustic guitar for more “authentic” results. Either way, Lightnin’ seldom made a bad record, and , who did a remarkable job of following his irregular bar patterns and abrupt song endings.

Recorded in 1963 for Prestige Bluesville, Lightnin’ Hopkins is backed by Leonard Gaskin (bass) and Herb Lovelle (drums), both straight Jazz musicians. Yet, this pairing results in an unpretentious sound that allows Lightnin’ Hopkins to do his thing. Part of the Fantasy reissue series, this AP pressing is dead quiet and the sonics are great. Hopkins slinky acoustic guitar playing is relayed with crisp detail. The songs on Goin Away are stripped-down to the most basic elements, allowing for the presence of the recording space to come through naturally. The dripping blues swagger of the title song will infect you.  It sounds as if Lightnin’ Hopkins is playing and singing in your room. It’s spooky.  but the sound of blues-in-the-flesh Tone Audio. 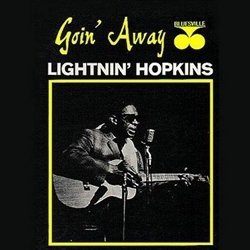