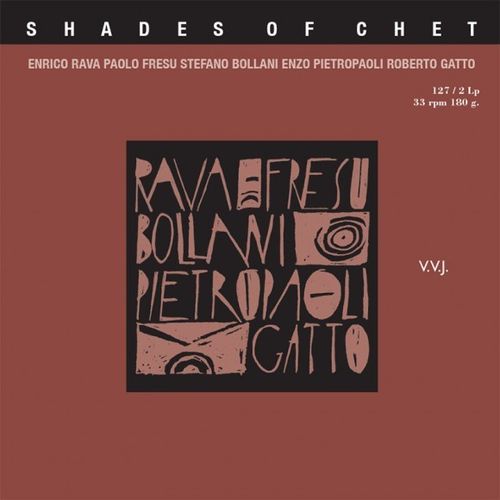 Let me start by saying I love these LPs; a tribute to jazz trumpeter & flugelhorn player Chet Baker. Enrico Rava leads this quintet of musicians for this recording of nine selections from people like Rodgers & Hart’s George Gershwin, Sonny Rollins, and others. Rava is joined by Paolo Fresu, Stefano Bollani, Enzo Pietropaoli, and Roberto Gatto. I found the selection, a collection of standards and less familiar tunes, to be much to my liking. The interpretation of these songs was very involving and moving. The performances are exceptional and so is the recording. We don’t get that many pure analogue recordings these days and even fewer with really great music, so this 2-LP set is truly a treat. I don’t know why they cut so few, but they are still available as I write this. My Recommendation is to hurry and get this one before it’s gone. - Dagogo

After a highly successful tour, this album came out in 1999, from the project known as "Tribute to Chet Baker" by the quintet of Enrico Rava and Paolo Fresu, with Stefano Bollani (piano), Enzo Pietropaoli (bass), Roberto Gatto (drums). .

In 1998, on the occasion of the 10th anniversary of the death of Chet Baker, Enrico Rava and Paolo Fresu, conceived the project of a series of concerts dedicated to Chet Baker. The tribute to the great trumpet player, with whom three members of the tribute group played (Rava, Pietropaoli and Gatto) is immediately understood not just in the sense of tribute, but in the sense of revival: in the style of the leaders, both so close to the poetics of Baker, in the choice of songs (not just those made famous by Baker, but also those he loved, although he played them rarely), in short, in the recreation of an atmosphere, crystallized in those golden 1950s, the years of troubled youth of Baker, to which most of the songs can be traced back.

A clarification: The tracks of the leaders are engraved on two different channels (Rava the left, Fresu the right); Moreover, both have done a song "alone", in a sort of personal homage: Enrico Rava "Retrato em branco e preto" (Antonio Carlos Jobim) and Paolo Fresu "You Can't Go Home Again" (Don Sebesky).

"This record is a tribute to Chet as an artist who unfolded his story and opened himself with the sound of his trumpet and voice. Together with Enrico we did not necessarily want to excluvely play material from his vast repertoire as an interpreter, but we selected what we ike most. Chet taught me that it is not important 'what it is' you play but 'how' you play it." - Paolo Fresu

The story of fonè   In the context of classical and jazz music market, fonè proposes three decades of recordings using advanced techniques, aimed at the recovery of the original musical atmospheres. Each new recording is the result of a passionate encounter between art and the art of execution and aims to recreate and reproduce the same spirit with which the works of the past have been performed. One basic feature that makes the difference between fonè and others, is the recording of musical works in natural places and original, constant production that leads to choose from time to time historically more space? Suitable for: church, theater, villa, living room ...   All this is done by retrieving a simple incision that does not do violence to the music: all the equipment is in high definition. Using pairs of valves Neumann microphones in the years 1947 and 1949 (U47, U48 and M49) using techniques very natural timbre bimicrofoniche field effect. These microphones have an important story: they are the microphones used to record the Beatles at Abbey Road Studio and RCA for the "Living Stereo."   No use is made of electronic manipulation of the signal, nor any artificial correction that if they make a sound easier to carve, it is true that distort so unacceptable. With this method you get to transfer the music information on the standard analog for the production of virgin vinyl 180g &  200g   fonè uses for the standard analog Nagra 4S, Studer C37 and J37 and Ampex ATR 102, the standard for digital, in collaboration with Philips the DSD (Direct Stream Digital) technology that has opened the doors to the SACD. For all subsequent stages of processing and control, in which it must be a playback of the sound reproduction systems are used very sophisticated.   After the pressing demands of the enthusiast market and after a long series of investigations to ensure the best possible support, the virgin vinyl 180/200 grams, fonè now makes available its most prestigious titles in the LP format.  strong opposition to current trends in the multinational market, tending to offer a product that is increasingly homogenized and devoid of content.    Implementation is of the highest quality and is dedicated to those who appreciate the pursuit of perfection in the field of sound reproduction, to collectors, to the true connoisseur and expert of things beautiful.