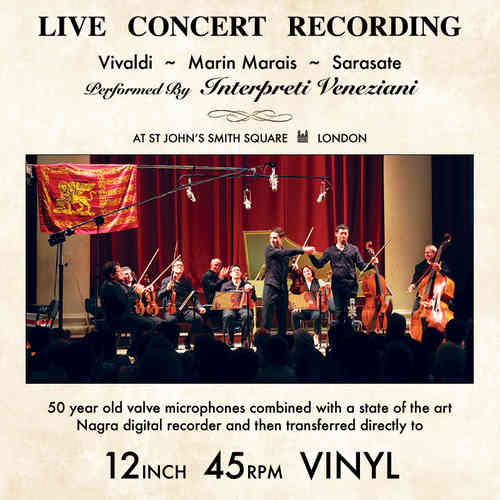 How did it sound?

Mike Valentine is a big fan of the work of Doug Sax's & Lincoln Mayorja's Sheffield Lab recordings. The vision was to produce a truly unique and vibrant classical release on vinyl. This method, although technically risky (A problem with the cut or pressing could result in total failure) is certainly purest and eliminates the multi tracking stage entirely. A few microphones (including Mike's preferred Neumann M50 Decca Tree array) and two tracks straight from Studio One's Custom Neve 8056 were all that was used apart from a passive insert box, elliptical equaliser and the lathes electronics.
The sound of the test cut genuinely knocked everyone’s socks off. John says "The mids shone like I've never heard before, in fact they were quite forward so I asked Jake to back them off a bit on the console, I feel like this is what I want to hear every time from vinyl". Anyone who entered the room that day for a playback was in agreement that it sounded three dimensional and open. Certainly this is no gimmick, it's a wholly impractical and expensive way to work, but cutting straight to lacquer has an unequivocally pure but rich tonality and clarity. "With a clean, quite pressing we knew this would be great, there was excitement in the air that day" - Mike Valentine.
Valve Microphones - Gefell - Akg - Flea
Recording Desk - AIR Custom Neve
Cutting Lathe Neumann VMS80
Pressed at RT Holland
Producer - Mike Valentine
180g 45rpm LP Directly Cut to Vinyl!
This recording uses 50 year old valve microphones combined with a state of the art Nagra digital recorder and then transferred directly to 12" 45rpm vinyl.
After making the direct cut disc of Vivaldi's Four Seasons, they took Interpreti Veneziani into Saint John's Smith Square for a live concert recording. This provided a great opportunity to record the orchestra's vibrant performance as well as the reaction of the audience who really seemed to enjoy the whole affair. In capturing the event, they have created this 12" 45rpm album and hopes it transports you back to that wonderful evening.
:The audiophile world involves a staggering amount of minutia. Everything leads, however, to an emotional payoff, as you're constantly reminded while rubbing shoulders with people devoted to good sound. So while, if you study the literature on, say, speaker placement or multichannel audio, you might expect everyone who cares about such matters to walk around with a pencil protector in his shirt pocket, instead you're much more likely to encounter someone whose passion for audio can hardly be contained and who has a lively sense of humor. Those points were underscored when I began correspoding with Mike Valentine, the owner of the UK audiophile label Chasing the Dragon...He isn't afraid to say something controversial (certainly his statement, "The sound quality here...is better than sex!" could spark a heated debate), and because he's filmed underwater sequences for over 90 films, including five James Bond movies, you quicky understand that he knows how to pursue lofty professional goals and have fun." - Jeff Wilson, The Absolute Sound
• 180g Virgin Vinyl
• 45rpm
• Directly cut to vinyl
• Mastered at Air Studios in London
• Decca Tree: Neumann M50
• Soloist: Neumann U47
• Cello: Neumann U47
• Harpsichord: Neumann U47
Musicians:
Giacobbe Stevanato, violin
Nicola Granillo, violin
Sebastiano Vianello, violin
Pietro Talamini, violin
Anania Maritan, violin
Sonia Amadio, viola
Davide Amadio, cello
Angelo Liziero, double bass
Paolo Cognolato, harpsichord
Selections:
Side A:
Antonio Vivaldi (1678-1741)
1. Symphony for Strings and Harpsichord RV127
2. Concerto in E minor RV275 "Allegro"
Marin Marais (1656-1728)
3. Les Folies d'Espagne
Side B:
Antonio Vivaldi
4. The Four Seasons Op.8 "Presto" from Summer
5. Concerto for Violin, Cello, Strings and Harpsichord RV547
Pablo de Sarasate (1844-1908)
6. Introduction and Tarantella for violin and strings Op.43 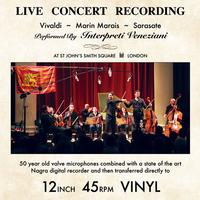