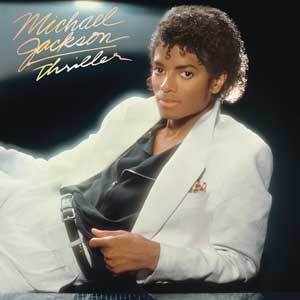 TAS Super LP List! Special Merit: Informal  Thriller is the sixth studio album by American singer Michael Jackson. It is his second studio album released through Epic Records. It was released on November 30, 1982, as the follow-up to Jackson's critically and commercially successful 1979 album Off the Wall. Thriller explores similar genres to those of Off the Wall, including pop, post-disco, rock and funk. In the United States, it is the best-selling album and has become the first album ever to be certified 32 times multi-platinum for U.S. sales, marking more than 32 million sales shipped. The album won a record-breaking eight Grammy Awards in 1984, including for Album of the Year. Features: • 150g Vinyl  • Gatefold Jacket Selections:
Side A: 1. Wanna Be Startin' Somethin' 2. Baby Be Mine 3. The Girl Is Mine 4. Thriller Side B: 1. Beat It 2. Billie Jean 3. Human Nature 4. P.Y.T. (Pretty Young Thing) 5. The Lady in My Life