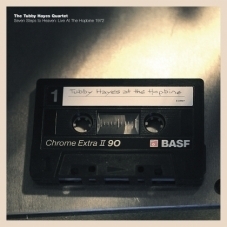 All Analogue Valve Mastering - 500 Copies Limited Edition -  Previously Unreleased
The Tubby Hayes Quartet
Seven Steps To Heaven:
Live At The Hopbine 1972
This is the first ever commercial release of an important late period Tubby Hayes performance that fully captures the more restrained and subtler side of his robust talent. The repertoire comprises the well known standards he was favouring at that time, and in addition to Hayes’ remarkable tenor saxophone and flute solos there are exceptional performances by pianist Mike Pyne, double bassist
Daryl Runswick and drummer Tony Oxley.
Late live work from the legendary Tubby Hayes – but material that still shows the tenor giant at the height of his powers! All tracks are nice and long, and really let Hayes stretch out – not just on tenor, but also on flute – an instrument that he plays with this surprisingly soulful tone, one that's almost a bit raspy at times, and as fluid in solo imagination as his tenor! The rest of the group is nice and lean – really giving Hayes plenty of room in the spotlight – and players include Mike Pyne on piano, Daryl Runswick on bass, and Tony Oxley on drums. The album features long takes on "Alone Together" and "Someday My Prince Will Come" – plus a six minute burning version of "Seven Steps To Heaven". (Comes with bonus download code, too!)
Side A
Someday My Prince Will Come (12:32)
Seven Steps To Heaven (5:40)
Side B
Alone Together (14:23)
Personnel
Tubby Hayes - tenor saxophone, flute
Mike Pyne - piano
Daryl Runswick - bass
Tony Oxley - drums
Recorded by Bill Hugkulstone at The Hopbine, London on Tuesday 2nd May 1972
Produced by Darrel Sheinman for Gearbox Records
Mastered by Jeremy Cooper at Gearbox Records
Cut on Haeco Scully lathe with Westrex RA1700 series amps, Westrex 3DIIA cutting head and Telefunken U73B tube limiter; Maselec master control and equalisation
Limited to 500 copies only.
12” 180 gram 33 rpm LP
Includes free download code