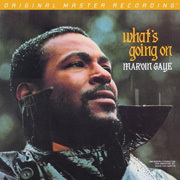 Marvin Gaye's masterpiece What's Going On is one of the most important and passionate soul records ever made and it directly influenced other artists to take greater responsibility in the meaning of their music. Gaye co-wrote the songs and produced the album, which was a social commentary on the American dream that had given itself to urban and environmental problems including unemployment and poverty.

Now available for the first time on a MoFi Numbered Limited Edition 180g LP! "In 1969 or 1970, I began to re-evaluate my whole concept of what I wanted my music to say," Gaye once said about the creation of What's Going On. "I was very much affected by letters my brother was sending me from Vietnam, as well as the social situation here at home. I realized that I had to put my own fantasies behind me if I wanted to write songs that would reach the souls of people.

I wanted them to take a look at what was happening in the world." The last thing Motown wanted its fans to think about, however, was "what was happening in the world." So with Gaye determined to shatter the label's hugely successful pop formula and address issues such as the Vietnam War, civil rights and the environment, Motown founder Berry Gordy was not pleased, to say the least. He claimed that "What's Going On" was the worst song he had ever heard. "

The staggeringly influential What’s Going On is pure soul genius and an ageless document about urban ills, employment issues, and social responsibilities that’s as relevant today as it was upon release in 1971. At once, Marvin Gaye both revolutionized Motown’s sound and upped the ante for his fellow musicians. Incredibly, the record almost didn’t get made.
Only after label owner Barry Gordy offered Gaye a financial challenge to complete the album inside of a month did the vocalist get to work. String, brass, and vocal overdubs were laid over the rhythm tracks while Gaye pioneered a new dual-vocal approach by relaxing and taking inspiration from a Lester Young album. The sessions’ vibes are reflected in tunes such as “Flyin’ High (In the Friendly Sky).” Environmental concerns and spiritual conversations, meanwhile, form the core of staples like “What’s Happening Brother,” “Mercy Mercy Me (The Ecology),” and “Inner City Blues (Make Me Wanna Holler).”
Mobile Fidelity’s pristine remaster from the original analog tapes highlights every contour of the rich timbres of Gaye’s voice. Sonics are airy, natural, and vivid. Seldom has contemplating the American Dream sounded so essential.