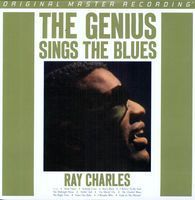 "Mobile Fidelity has now remastered the original mono master tape-revealing both its beauty and its warts with startling clarity. The beauty, of course, lies in the music." - Wayne Garcia, The Absolute Sound Magazine,

The Genius Sings the Blues began as a simple compilation. Comprised of a dozen songs Ray Charles made between 1952 and 1960, the collection was released in 1961 by Atlantic Records to counter the singer’s migration to rival ABC Paramount. What Atlantic originally underestimated is that the album contained many of Charles’ greatest works, all unified by their bluesy emotions and stirring arrangements.

A classic of the soul and R&B canon, The Genius Sings the Blues is a snapshot of the evolution of timeless American music captured by the pianist’s indelible rhythmic pace, gospel roots, jazz backgrounds, and Southern-styled accents. From the iconic cover art to the distinguished music within, everything about the thematic record is iconic. Now, nearly 50 years later, it can be heard in pristine fidelity sourced from the original master tapes.

Mobile Fidelity’s engineers have taken great pains to ensure that every clink of the piano keys, ache of Charles’ rolling voice, and rush of the backing arrangements sounds better than they have since first being recorded in the studio. This Mono LP simply lays waste to the competition. Previous editions of The Genius Sings the Blues, including a remastered digital edition from Rhino, suffered from varying levels, distracting static and noise, and inconsistent vocal balances. Mobile Fidelity has gone back to the original mono master tapes to correct these problems, giving music lovers what is now unquestionably the best-sounding Charles album to stem from his peak era. 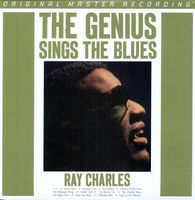