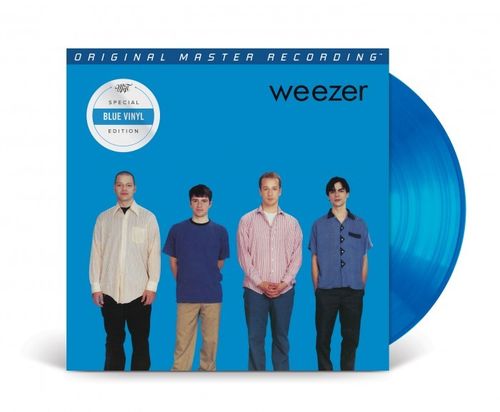 Mobile Fidelity’s GAIN 2 remastering relies on the use of original master tapes, a proprietary cutting system and a strictly limited number of pressings in order to ensure uniform quality of each finished record. Both of Weezer’s albums deserve and benefit from that meticulous attention to detail. Weezer is an easy recommendation for anyone who enjoys youthful, upbeat rock.- Theauduiobeat

Weezer doesn’t look like rock stars, its amusing name doesn’t evoke stadium-heights glories, and the group’s lyrics don’t exude confidence or flash. For precisely these reasons, and the fact that the band’s songs on its self-titled debut are the stuff of air-guitar dreams and shout-it-out choruses, the quartet became ironic arena-rock stars equally celebrated by in-the-know hipsters and mainstream radio listeners. Replete with urgent melodies, quirky confessional narratives, wry humor, and gargantuan hooks, Weezer (Blue Album) remains the best geek-rock record ever made. Mastered from the original master tapes and pressed on 180g LP at RTI, Mobile Fidelity’s analog version of the 1994 release Rolling Stone named the 297th greatest album ever recorded finally possesses the grand-scale sonics that the music’s bunker-busting hooks deserve. Cars frontman Ric Ocasek’s polished production is now both free of artificial ceilings that squashed the explosive dynamics and rid of the compression that saddled the frequency range. Instrumental separation is vastly improved, and the amount of midrange energy seemingly doubled. This reissue is guaranteed to help you rock out. Underdogs and misfits, Weezer emerged from Los Angeles as nerdy kids that eschewed traditional party-hard ways in favor of studying Kiss records, engaging in conversations about old LPs, and playing Dungeons and Dragons. The band’s awkwardness joyfully translates in its songs on its 1994 debut, largely concerned with jealous insecurities, pop culture, true-to-life heartbreak, common accidents, youthful misconceptions, and daydreaming. Unlike many of their indie-rock peers, Weezer finds no need to conceal feelings in obscurities, snark, or impossibly impenetrable quirkiness. While every song on Weezer is a delight, “In the Garage,” the ultimate ode to a heavy-metal practice space and private musical retreat, best spells out the album’s appeal and the band’s intent. “I’ve got an electric guitar/I play my stupid songs/I write these stupid words/And I love every one/Waiting there for me/Yes I do, I do/In the garage/No one cares about my ways/In the garage where I belong” sings leader Rivers Cuomo, his voice often meshing with that of Matt Sharp, and giving the material a barbershop-quartet harmonic boost in line with the catchiness of the guitar-driven bridges and rhythmic foundations. More than three-times platinum, the Blue Album, as it’s often called, also claims an iconic cover that pays tribute to that of the Feelies’ Crazy Rhythms. The picture—as well as the bubblegum-inspired content within—has become an indelible part of modern culture. Weezer graces must-have lists from Rolling Stone, Pitchfork, Guitar World, and more. And needless to say, “My Name Is Jonas,” “Say It Ain’t So,” “Buddy Holly,” and “Undone (The Sweater Song)” are all modern classics.  "In the early 1990s, Cuomo had an awkward girlfriend who was routinely picked on. His efforts to stick up for her inspired Weezer's breakthrough, a track whose bubble-grunge hooks and lines such as "I look just like Buddy Holly/And you're Mary Tyler Moore" helped the band reach a nation of pop-minded suburban punks. It also earned Weezer autographed photos from the real Mary Tyler Moore." - Rolling Stone   Numbered, Limited Edition  Half-Speed Production and Mastering by Mobile Fidelity Sound Lab  Specially Plated and Pressed on 180 grams of High Definition Vinyl  Special Static Free - Dust Free Inner Sleeve  Heavy Duty Protective Packaging  Mastered from the Original Master Tapes

Brian Bell, guitar, vocals Rivers Cuomo, vocals, guitar Matt Sharp, bass, vocals Patrick Wilson, drums Selections: Side A: 1. My Name Is Jonas 2. No One Else 3. The World Has Turned and Left Me Here 4. Buddy Holly 5. Undone (The Sweater Song) 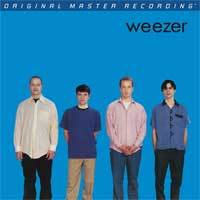