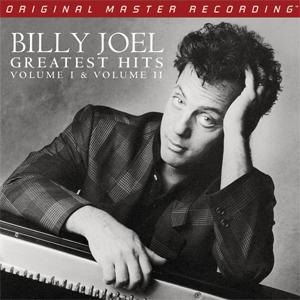 What we have here, for those who actually like the guy, are two albums Greatest Hits Volume I and Volume II, squeezed onto three slabs of vinyl and placed into a sturdy box. The original volumes have been the subject to some criticism in audiophile terms, being accused of sounding rather lifeless. Mobile Fidelity has been allowed access to the original master tapes to, in effect, start again, resulting in this limited-edition release containing almost all of Joel’s peak-era chart hits from 1973 to 1985, as well as a selection of album favourites. As for mastering, the sound quality is a tad warm and I thought that dynamics were just a bit constricted, I wanted the music to really let loose but, on the whole, the sonics remain very attractive. The music actually encourages you to increase the volume, which is exactly what I did but four notches on my pre-amp, allowing Joel to belt out his music and for the detail to spring to life. There’s no smearing or bloom and the balance, especially in how the vocal sits alongside the piano and background music, is judged well. - Theaudiophileman

Mastered from the Original Master Tapes for the First Time: Unsurpassed Sound!

26-Track Set Includes Standards Such as "Piano Man," "It's Still Rock and Roll to Me," "Pressure," "Allentown," "Uptown Girl," and Many More No matter how difficult, Billy Joel always succeeds in wrapping his head around rich swaths of American pop, his music stopping by way of New Orleans, Kansas City, Memphis, Chicago, and other milestone cities.

The singer’s simple, yet disarmingly effective lyrics speak to universal truths and uplift. Joel’s melodic flair does the rest, filling out tunes with comprehensive arrangements, towering harmonies, and a swift sense of purpose that made him one of the most beloved artists of his generation. His catalog testifies on behalf of unimpeachably ovational songwriting and execution.

Experience all his hits in heart-rustling fidelity.

It’s the third best-selling record in American history. It contains nearly every one of Billy Joel’s peak-era chart hits as well as a smattering of fan favorites. It encapsulates exactly why the singer-songwriter-pianist remains one of the most beloved, commercially successful, relentlessly creative, and oft-referenced artists in music. Spanning 1973 to 1985, Joel's Greatest Hits Volume I & Volume II functions as a hand-guided tour through pop, rock, doo-wop, blues, R&B, blue-eyed soul, and chamber jazz. It is rivaled by few—if any—other compilations.

Mastered from the original master tapes and pressed on 180g vinyl at RTI, our pristine reissue of this ubiquitous classic finally does justice to the Hall of Fame caliber music. Part of the label’s restoration of Joel’s most crucial releases, Greatest Hits Volume I & Volume II literally takes on new life. Devoid of the flatness, squelched dynamics, and limited soundscapes that defined previous versions, the collection brings Joel’s genius and intentions into a more transparent light.

Is it any wonder that this double set has moved more than 23 million copies to date? No. All told, 20 Top 40 singles line up alongside six album-track favorites, the songs all instantly recognized by name. This is touchstone material that’s long crossed over into multiple generations of listeners and eradicated genre boundaries, and formed the basis of Joel’s constantly sold-out concerts for the past two-plus decades.

As demonstrated on diverse fare ranging from “Piano Man” to “The Stranger,” “Big Shot” to “Uptown Girl,” and the pair of then-new tracks (“You’re Only Human (Second Wind)” and “The Night Is Still Young”), Joel always succeeds in wrapping his head around rich swaths of American pop, his music stopping by way of New Orleans, Kansas City, Memphis, Chicago, and other milestone cities.

The singer’s simple, yet disarmingly effective lyrics speak to universal truths and uplift. Joel’s melodic flair does the rest, filling out tunes with comprehensive arrangements, towering harmonies, and a swift sense of purpose. His catalog testifies on behalf of unimpeachably ovational songwriting and execution. Experience all his hits in heart-rustling fidelity. They, and you, have waited long enough for such an intimate encounter. 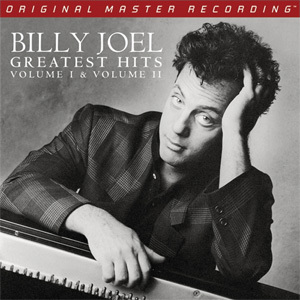