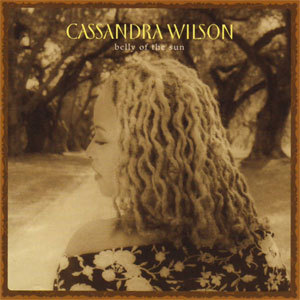 As always, listening to discs from Pure Pleasure is…a pure pleasure!  The sound is remarkably noise-free There is a good mixture of different styles that help keep the listener interested and involved.  Audiophiles will probably rush out and get this record, & the music is good too! - AudiophileAudition

Cassandar Returns to her Mississippi Blues Roots! Blue Note released Cassandra Wilson's "Belly Of The Sun" album in 2002. The album, which was recorded in the Clarksdale, Mississippi train station, features a guest appearance from India.Arie for the song "Just Another Parade". "Returning to her Mississippi blues roots, singer Cassandra Wilson interprets the stories like no one else can. Her warm, contralto voice hypnotizes. Surrounded by the natural sound of her 6-piece touring band, Wilson settles in for a refreshing look at Americana. Plaintive guitar cries and hands-down percussion provide a natural landscape.

Steel pans, dobro, hand drums, and gentle, foot-stompin' rhythms give her traditional session credibility. "Guests add variety. Boogaloo Ames supplies an unencumbered, barrelhouse accompaniment for two traditional songs. The duo simplicity of singer with piano makes them shine with a special element - a lesson in history. Their charming interpretation inspires. Elsewhere, Wilson adds variety in form. "Show Me A Love" and "Road So Clear" caress a modern, electric blues message. "Hot Tamales" and "You Gotta Move", recorded in a railroad boxcar, come from way back, drawing upon spiritual and field holler roots. India.Arei's vocal duet with Wilson pierces the heart with its soul-stirring message. While Jobim's "Waters of March" does not fit the tried-and-true formula, it allows Wilson the opportunity to lighten her session with a message that speaks, nevertheless, the same language as the blues: a promise of good times ahead.

A highly recommended album, Belly Of the Sun returns to the land where it all began and takes us along for a soul stirring ride." - Jim Santella, allaboutjazz.com, April 12, 2002 "[A]n album that seamlessly and comfortably moves between jazz, pop, rock and blues, stitched together by Wilson's sultry voice, magnificent phrasing and the sure backing of her core group... The instrumentation and arrangements are imaginative and varied throughout and intimately and warmly recorded. Three-dimensionality and purity reign supreme here, with Technicolor instrumental timbres, tactile textures and full bodied dynamics. Wilson's voice is richly presented and artifact-free. The perspective is intimate and close-up. Ron McMaster's lacquer cut is superbly transparent and appropriately intimate and the Pallas pressing as usual does not disappoint." -

As always, listening to discs from Pure Pleasure is…a pure pleasure! The sound is remarkably noise-free... Cassandra’s rich voice is as distinctive as always... Much of Wilson’s jazz style is not unlike Patricia Barber with less of the sung poetry that Barber often employs. There is a good mixture of different styles that help keep the listener interested and involved. Audiophiles will probably rush out and get this record, but the good news is the music is good too!"