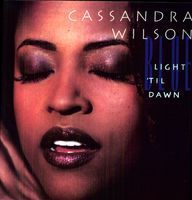 If you only know this from the CD, you're in for a three-dimensional, textural shock. If you don't know this record at all, you're in for the same shock. The sonics are superb, from the three-dimensional imaging and soundstaging to the ultra-transparency and rich atmospherics, this double LP set has it all. But more importantly, the production, the playing, the arranging and especially the sultry Wilson's vocalizing are transfixing.

Blue Light 'til Dawn has not lost an iota of musical impact since first being issued in 1993 but it has gained a great deal of sonic stature. Highly recommended!

Cassandra Wilson started out as a jazz singer, doing gigs with several innovative bands (including Brooklyn's experimental M-Base collective) and at the same time recording typical jazz-singer let-me-entertain-you stuff like "Night and Day," "Blue Skies" and shooby dooby dooby. Eventually the Mississippi-born New York–based vocalist, who reigned among the elite jazz singers of the 1980s, became restless and began to look beyond torch songs for inspiration. So she looked outside of jazz for inspiration. In interviews, she's recalled how she began seeking new challenges for her voice, a mighty instrument blessed with husky overtones and an alluringly smoky woodish hue. She began to integrate gospel and blues and pop songs into her performances, eventually assimilating them into music that blurs genre distinctions entirely. Blue Light 'Til Dawn is the first album to capture that shift. It features wondrously spare, molasses-slow versions of Robert Johnson ("Come On in My Kitchen," "Hellhound On My Trail"), Philly soul (Thom Bell and Linda Creed's "Children Of The Night"), pop (Van Morrison's "Tupelo Honey") and torch song ("You Don't Know What Love Is"). Working with a small group of inventive New York jazzmen, emphasizing hand drums and percussion over trap set, Wilson cultivates the opposite of dazzle, hers is an inviting, shadow-filled sound that calls from a lonesome bayou. Atmosphere dictates everything that happens on these tracks, and helps knit together pieces from disparate ends of popular music. It also guides Wilson's vocals: Her sullen "Hellhound" wanders far from typical blues woe, yet winds up an apt, weary summation of it all the same.    Blue Light 'Til Dawn became an adult contemporary hit, and set Wilson on the course she's pursued since. The records are all engrossing and shaped by extremely sensitive musicianship, but Blue Light 'Til Dawn has something more, the renegade energy of one who, having taken a flying leap, is just discovering a new mode of expression.

"This Pure Pleasure two-record set was not the first vinyl issue of this album, but it was certainly worth the wait. While I have no quibbles about the sound of the CD, these LPs improve on it meaningful ways. Wilson's voice is stunningly real, her presence anchoring each tune within the delicate soundscape that the recording captures so ably. Midrange density and treble filigree combine with a strong bass underpinning, guitars and percussion launch dynamically into digital territory, yet it is the small shifts in volume differentiating the touch of the musicians on their instruments that give the sonic picture its completeness. If you are used to the CD, these LPs will give you both a different and better window on the music, and they cost far less than a first-edition LP. As is usual for Pure Pleasure, the Pallas pressing is top notch, both in terms of its lack of surface noise and bottom-of-the-groove whoosh." - Marc Mickelson, Theaudiobeat.com, Music 4.5./5, Sound 4.5/5

"The British audiophile label Pure Pleasure has given Wilson’s album the royal audiophile LP treatment with re-mastering by Blue Note’s Ron McMaster, done at Capitol Studios. The CD release has been languorously stretched out over two LPs with none of the sides exceeding fifteen minutes. Right off with the Side A initial track, “You Don’t Know What Love Is,” you immediately hear the improvement in acoustics. Cassandra’s smoky, sultry phrasing matched to the steel string guitar’s tone, and Charlie Burnham’s violin set a mood that grabs your attention and tells you something special is happening here. Wilson’s delivery is impeccable and heartfelt. The soundstage is wide and crystal clear." - Jeff Krow, Audaud.com, 4.5 Stars!! 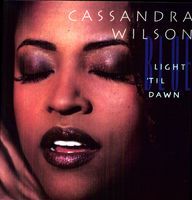