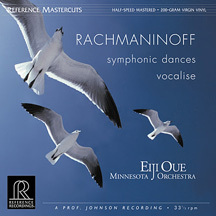 FIRST TIME EVER ON LP!
Widely believed to be the finest orchestral recording RR has ever made.

"In any case, this reading is the deepest I've heard on record and while Johnson's recorded perspective is distant, the instrumental balance borders on outright perfection, the harmonic balance is equally so, and the dynamics and bass weight are staggering. If your system has the power reserves and low frequency response necessary to reproduce them, the macro dynamics and bottom end in this recording are sensational but more importantly, the string sound is sensation and the profusion of orchestral colors remarkable.

Sergei Rachmaninoff was one of the most beloved composers of the twentieth century. His music is redolent of his Russian homeland, and it sings long, lush melodies that define the term "romantic." Everyone who knows and loves his piano concertos will enjoy these lyrical and dynamic works for orchestra. The "Symphonic Dances" in recent years have become one of Rachmaninoff’s most-performed scores. "Vocalise" is one of the great classical melodies, and is hummable by everyone.

New LP Review
"The combination of the Symphonic Dances’ spectacular orchestrations, the great playing of the Minnesota Orchestra, and the superb remastering by RR makes this an audiophile winner all the way." -- John Sunier, Audiophile Audition 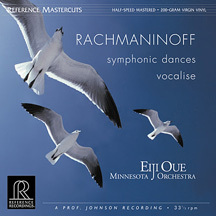