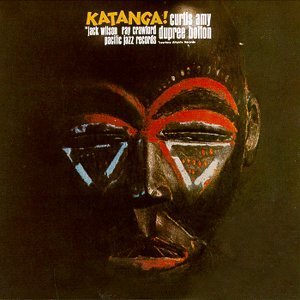 Not to be missed Tone Poet release previously only available as a costly import of dubious origin. You won’t regret the purchase. I didn’t. -Sound 9/10 Michael Fremer AnaloguePlanet

The new Tone Poet reissue which I bought immediately. This is a very different sort of reissue for the series and it marks a change I applaud. Anyhow, Kantanga! is one of those no-brainer albums you should pick up when you can.  Essential listening. - AudiophileReview

While I was impressed with how good this reissue of Katanga! sounded, I was especially pleased that this hard-to-find recording is back in print. Sound 4.5/5 Soundstage

Katanga! is an album by saxophonist Curtis Amy recorded in early 1963 for the Pacific Jazz label

Who are these guys? That's the usual reaction of anyone fortunate enough to have come across this remarkable (and remarkably rare) session from 1963. The last of six albums saxophonist Curtis Amy recorded for Pacific Jazz in the early-1960s, Katanga! transcends not only the rest but plenty of other recorded jazz from that period as well. Trumpeter Dupree Bolton's brilliant playing here is simply breathtaking in one of his very few recorded appearances during a career plagued with personal problems. Bolton and Amy are joined by guitarist Ray Crawford, pianist Jack Wilson, bassist Victor Gaskin, and drummer Doug Sides on this gem of an album.