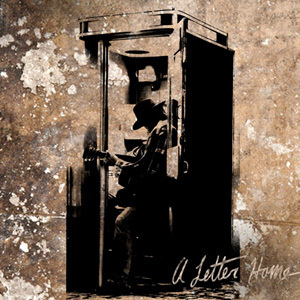 Acoustic Set Contains Covers of Bob Dylan, Bruce Springsteen, Willie Nelson, The Everly Brothers And More!
A Letter Home contains 11 songs recorded in a refurbished 1947 Voice-o-Graph vinyl booth at Jack White's Nashville record store.
It was intentionally made with the vintage sound from the age of the old 78 rpm vinyl recordings.
Third Man Records unearths Neil Young’s A Letter Home and shares it with his current day record company, Reprise Records. An unheard collection of rediscovered songs from the past recorded on ancient electro-mechanical technology captures and unleashes the essence of something that could have been gone forever. — Homer Grosvenor
Tracks includes covers of such songs as Bob Dylan's "Girl From the North Country", Tim Hardin's "Reason To Believe" and two songs from Gordon Lightfoot, "Early Morning Rain" and "If I Could Read Your Mind". There is also a cover of The Everly Brothers' "I Wonder If I Care As Much" and Springsteen's "My Hometown".
""Imagine a very simple recording studio not much larger than a phone booth and you'll get the idea," reads a press release. "Recorded live to track to one-track, mono, the album has an inherent warm, primitive feel of a vintage Folkways recording."" - rollingstone.com
• Recorded live to track to one-track, mono
• Recorded to acetate by: George Ingram
• Mastered by Bob Ludwig for Gateway Mastering Studios
Musicians:
Neil Young, vocal, guitar, harmonica, piano
Jack White, vocal, piano - "On the Road Again", vocal, piano - "I Wonder if I Care As Much"
Selections:
1. Changes (Phil Ochs)
2. Girl From the North Country (Bob Dylan)
3. Needle Of Death (Bert Jansch)
4. Earthly Morning Rain (Gordon Lightfoot)
5. Crazy (Willie Nelson)
6. Reason To Believe (Tim Hardin)
7. On the Road Again (Willie Nelson)
8. If You Could Read My Mind (Gordon Lightfoot)
9. Since I Met You Baby (Ivory Joe Hunter)
10. My Hometown (Bruce Springsteen)
11. I Wonder If I Care As Much (Everly Brothers)