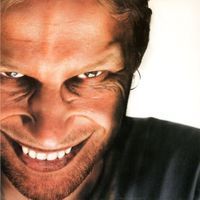 Aphex Twins' third major-label album  was his first to work with jungle -- though, to his credit, he had released the breakbeat EP  almost a year earlier.

Contemporaries were beginning to incorporate moderate use of drum'n'bass in their work as well, but this album was more extreme than virtually all jungle being made at the time. The beats are jackhammer quick and even more jarring considering what is -- for the most part -- laid over the top: the same fragile, slow-moving melodies that characterized  his earlier ambient works.

Most overtly disturbing is "Milkman," the first straight-ahead vocal track  the song is a child-like ode that gradually deteriorates into a bizarre fantasy concerning the milkman's wife.

With all curious idiosyncracies, though, the  is a very listenable record and a worthy follow-up to i care becuse you do

Aphex Twin used his real name for an album that reflected the sound of the age and the way he felt about it.

Composed mostly on a Mac – James moved away from pure electronica into a more hard-hitting soundscape – ambient meets jungle by way of child-like voices and chunky chords that feel warm and fuzzy. Richard D. James is doused in beats while something musically interesting goes on in the background.

4 sets the stage – an almost classical violin-note arches over a rapid drum pattern while the melody swirls and lingers like a couple walking on a beach. Cornish Acid is muscular and chunky while Peek 82454201’s metallic beats are intense. Things take a light-hearted turn with the deceptively pretty Fingerbib – where warbling keyboards swoop and swim. Carn Marth returns to those jungle dream patterns but this time with wild keyboard flutters that keep you on your toes.

To Cure A Weakling Child features James’ voice sampled to sound like the child in the title – whilst deeply sinister rhythms threaten – it’s both unnerving and brilliant. At a piffling two and one minutes - Goon Gumpas and the admittedly infectious Yellow Caix feel like dancing bears between the main acts.

It ends on the Jew’s harp boing of Logan Rock Witch sounding like the theme music to an outback movie where someone’s going to have a bad day.

Richard D. James Album is an intense album that captures the sound of electronica at a critical phase, not pretty but surprisingly addictive.

6 To Cure a Weakling Child