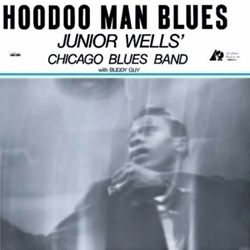 Without a doubt the best blues album ever made and this 45rpm pressing is amazing. A rare 10 out of 10 musically and sonically.

The original LP was listed on Stereophile's Record To Die For list.

One of the all-time great urban blues records and the best-seller in the famed Delmark catalog.

Hoodoo Man Blues is so full of bravado and snap it'll make you feel tough just listening to it. Not all of the Delmark titles were recorded very well, but this one certainly was. And at 45 RPM, this now stands as the undisputed definitive version. Hoodoo Man Blues, which featuresBuddy Guy on guitar, is not only Junior Wells' first LP appearance, it's damn near the first LP by a Chicago blues band.

Chess and a few other labels had reissued 45s by Muddy Waters, Sonny Boy Williamson, Howlin' Wolf, Jimmy Reed, Elmore James, etc., but virtually no one had tried to capture the Chicago blues sound free of the limitations of juke box/airplay promotion.

Hoodoo Man Blues went a long way in the popularization of real Chicago blues and of Junior Wells.

Hoodoo Man Blues is one of the truly classic blues albums of the 1960s, and one of the first to fully document, in the superior acoustics of a recording studio, the smoky ambience of a night at a West Side nightspot. Junior Wells just set up with his usual cohorts -- guitarist Buddy Guy, bassist Jack Myers, and drummer Billy Warren -- and proceeded to blow up a storm, bringing an immediacy to "Snatch It Back and Hold It," "You Don't Love Me, Baby," "Chitlins con Carne," and the rest of the tracks that is absolutely mesmerizing. Widely regarded as one of Wells' finest achievements, it also became Delmark's best-selling release of all time. Producer Bob Koester vividly captures the type of grit that Wells brought to the stage.

When Wells and his colleagues dig into "Good Morning, Schoolgirl," "Yonder Wall," or "We're Ready," they sound raw, gutsy, and uninhibited. And while Guy leaves the singing to Wells, he really shines on guitar. Guy, it should be noted, was listed as "Friendly Chap" on Delmark's original LP version of Hoodoo Man Blues; Delmark thought Guy was under contract to Chess, so they gave him a pseudonym. But by the early '70s, Guy's real name was being listed on pressings. This is essential listening for lovers of electric Chicago blues.

The blues is both the foundation and the enemy of all rock music’s creativity. Foundation, because without it we’d be listening to nothing but ABBA and Cliff Richard, or any music which has had its blackness pumped out of it. Without the blues, there would be no rock’n’roll, no rock, no soul or indeed any music – even Kraftwerk – of worth made outside of the classical canon in the last 100 years. But it’s also something that’s often best avoided, as any 1970s music fan who’s endured hours of plodding 12-bar solos, lyrics about how "mah woman done let me down", or similar blues clichés can attest. The blues is easy to play, but hard to play well.
Fortunately, the record under discussion here is a brilliant and inventive foundation stone of blues. Junior Wells, Chicago blues vocalist and harmonica player, had been around for a while before producer Bob Koester decided to record him for the Delmark label in 1965. In his sleevenotes, Koester states he had no idea that this would be the first time a working Chicago blues band was given the full run of a studio, with no time limits or singles planned. With the presence of Buddy Guy – renamed for contractual reasons as ‘Friendly Chap’ – on guitar, the session was set up to be as powerful as possible.
Wells’ style is at once laidback and forceful. On songs like Snatch It Back and Hold It and a louche Hound Dog, he is relaxed but not messing about. On Good Morning Schoolgirl, a staple of the 1960s British blues scenes, he’s a danger to shipping, never mind young women. And when he plays the harmonica – sometimes smoothly, sometimes like it’s an airbed being punished – Wells is more like Jimi Hendrix than Stevie Wonder. The band are similarly deceptively casual and enormously powerful – an effect enhanced by Guy’s guitar, which was for emergency reasons often played through a Leslie organ speaker (making it sound, unsurprisingly, rather Beatles-y for a blues guitar).
And the results are timeless. Regularly voted amongst the best blues album of all time by virtually everyone since its release, Hoodoo Man Blues is a historical artefact, a listening joy and a blues tour de force. - BBC Music
The original LP was listed on Stereophile's Record To Die For list.
Musicians:
Junior Wells, harmonica, vocals
Buddy Guy, guitar
Jack Myers, bass
Billy Warren, drums 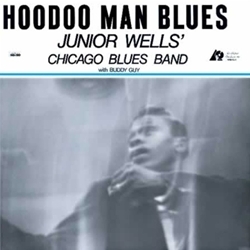