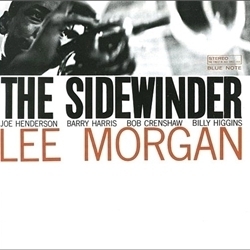 "The Sidewinder," Lee Morgan's 24-bar blues number with its infectious bass line and backbeat, instantly became one of the most popular pieces in modern jazz history. Morgan didn't stop there, however, as every track on this classic album is a true gem.

The title track groover is complemented here beautifully by the lyrical and soulful "Totem Pole," "Gary's Notebook," "Boy, What a Night" and "Hocus-Pocus." In fine support of Morgan on The Sidewinder are Joe Henderson on tenor, Barry Harrison piano, Bob Crenshaw on bass and Billy Higgins on drums.

It came about purely by accident. At the end of a Lee Morgan record date in 1963, one more song was needed. The trumpeter quickly put together a catchy ditty with a boogaloo rhythm that he called “The Sidewinder.” While it was born as an afterthought, “The Sidewinder” became Morgan’s biggest hit and launched a boogaloo craze, even being used on a nationally televised commercial. The irresistible playing by Morgan, Joe Henderson and a rhythm section propelled by Billy Higgins made this into one of Blue Note’s biggest selling records. Lee Morgan, who was 25 at the time, had already been a household name in jazz for seven years. He began recording for Blue Note as a leader in 1956 when he was just 18, had been a featured member of the Dizzy Gillespie Big Band while still a teenager, and had been the star of Art Blakey’s Jazz Messengers during 1958-61.

After a bit of time off the scene, in 1963 he launched his comeback with The Sidewinder. Beyond the classic title cut, The Sidewinder is also notable for four other Morgan hard bop originals including “Totem Pole” and “Gary’s Notebook.” Morgan is in brilliant form throughout, playing with the brashness, confidence and soulfulness that had made him famous as a child prodigy in jazz. Joe Henderson was rapidly emerging as one of the top young tenor-saxophonists of the time, and the quintet, which had never played together as a unit before, sounded like a well-oiled jazz machine that was on high gear.

Reissued in superb sound, The Sidewinder is not only one of the major musical highpoints of Lee Morgan’s life but music for the ages.