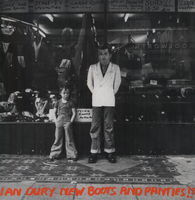 "In some respects this could be considered a brave choice for an audiophile label. In others it’s a no-brainer. Speakers Corner is much more a music label than an audiophile label. That they also produce consistently excellent-sounding records is just a bonus. New Boots was long overdue a reissue, and kudos to Kai Seemann and Speakers Corner for not just delivering but doing so in such spectacular fashion. Dury may never have scaled these dizzy heights again -- at least not across a complete album -- but his considerable best just got a whole lot better. I can’t recommend this album highly enough (as many who know me will testify), but even if you decide it’s not for you, it’s still worth keeping around. Anything that can clear undesirables from a showroom as quickly as this is cast iron guaranteed to work on the in-laws!" - Roy Gregory, theaudiobeat.com, 5/5 Music, 4/5 Sound!

This issue includes “Sex & Drugs & Rock ‘n’ Roll” which was not included on the UK release.

It is not difficult to call Ian Dury the very epitome of British rock music in the Seventies. The rough charm of his bawdy Cockney accent, spiced with snotty rock, which he often belted out in pogo punk, was just the thing for the boulevard and lent a voice to the British working class.