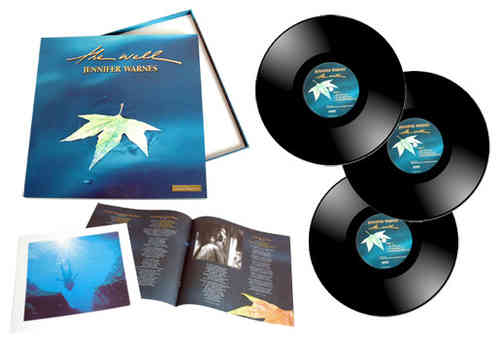 If my usual scale goes up to 10, I'm giving this an eleven. It's so good sounding it's hard to listen to anything afterwards. A home run that gets my highest recommendation."DD, Hi-fi+

Jennifer's superb rendition of Bob Dylan's classic "Born In Time." The fabulous record from the multi-award-winning artist who brought us Famous Blue Raincoat. The analog recording is sweet, smooth and surprisingly restrained. Jennifer's interpretive prowess is given a full workout on brilliant covers of "Invitation To the Blues" and "And So It Goes," as well as the shimmering beauty of the title track and "Patriot's Dream."

Individually Numbered, Limited Edition Three 180-gram 45rpm LP Box Set!
All-Tube Mastering By Bernie Grundman Specifically For 45-rpm Release!
Custom Wood Box With Updated Art and Individually Numbered Plaques!  ". All-tube mastering has been utilized by Bernie Grundman specifically for this 45-rpm release. Renew... rebirth... revive: A well means more in analogy than it does as a bearer of water. It can symbolize a complete transformation or a brief transition - the rejuvenation of a spirit in passing. A trip to beautiful Jacob's Well outside of Austin, Texas with friend Doyle Bramhall proved an inspiration too rich to ignore. From this almost chance encounter comes The Well, a lovely collection of deeply-felt songs about renewing, rebirthing and reviving. Songs on The Well feature stories about life-defining passages "Prairie Melancholy," rebirth "The Well," conquering fear "The Panther," Thankfulness "The Nightingale," a relationship at the cross-roads "And So It Goes," appreciation "Patriot's Dream" and discoveries "You Don't Know Me." Jennifer Warnes has chosen pieces that hint their deeper meanings. There are no soap-boxes with which to preach The Well. Produced by Jennifer Warnes and composer/producer Martin Davich (ER), this largely acoustic album freely explores folk, pop, roots, blues and jazz. The singer has collected stellar musical talent to flesh out her vision, including; Arlo Guthrie, Doyle Bramhall (along with his son Doyle II), Rick Cunha, Vinnie Colaiuta, Dean Parks, Blondie Chaplin, George Doering, Leland Sklar, Abraham Laboriel, Lenny Castro, Van Dyke Parks and many others. On the technical side, the brilliant sound of The Well was crafted by Mark Johnson, Frank Wolf, George Massenburg, Elliot Scheiner, John Cevetello, Paul Deiter and Mark Cross. "Jennifer Warnes is one of the most underrated pop singers of her generation. Her albums, though few and far between, brim with melody and craft - and lyrics both intelligent and emotionally weighted... The songs are lovingly produced, inventively orchestrated, and stocked with a who's who of studio musicians.

But Warnes' expressive vocals overshadow all.  She's a signer who asks a lot of her gifts, always searching for finer degrees of nuance and dynamics like a painter mixing color on a palette. The reissue from Impex Records (staffed by former Cisco émigrés) is a model for the premium LP industry.   45rpm 180-gram pressings are presented in an individually numbered wood box with a twelve-page, large format booklet that includes notes and lyrics.  Bernie Grundman presided over the all-tube remastering.  Sonically (is) this about as good as it gets from a studio-bred multi-track - fabulous acoustic textures, deep bass, and awesome ambience.  A vinyl lover's dream come true." -

Music: 4 1/2 out of 5; Sonics: 5 out of 5 - Neil Gader, The Absolute Sound, December 2011 "The first thing you notice about this box set is its museum quality packaging. Instead of cardboard, the box is constructed of wood and impeccably finished with the highest quality paper stock. It's easily one of the most beautiful record boxes ever. Inside the box, an equally gorgeous booklet and photo insert provide lyrics and production notes. How can the audio production live up to such a gorgeous packaging, I wondered... Warnes' singing is captivating on each number, but her rendition of "You Don't Know Me" with Doyle Bramhall stand comparison with Ray Charles' classic version. The LPs were mastered by Bernie Grundman and the sound is to die for.

If my usual scale goes up to 10, I'm giving this an eleven. It's so good sounding it's hard to listen to anything afterwards. A home run that gets my highest recommendation."DD, Hi-fi+

This is, in my opinion one of her best albums ever recorded. The quality of this pressing is outstanding. The entire package is extremely well put together. Definitely a collector's item. 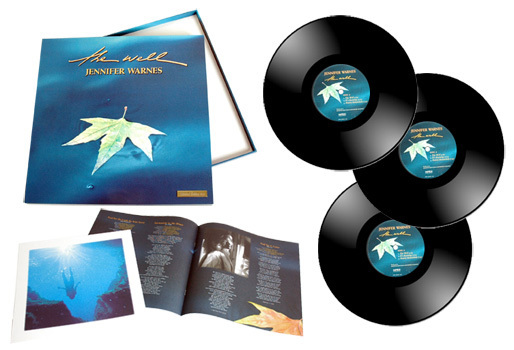